A question has persisted for the past 20 years of my career: What led you to the study of pornography? Sexuality scholars are obstinately assumed to have a traumatic story that led to a proclivity for perversity. Or they are inevitably approaching danger and demise when doing their work. At my PhD oral exams, for example, one of my examiners feared I would “fall off the face of the earth” for studying Southeast Asian gonzo pornography and, in particular, for pursuing questions about sexual relations between Asian female sex workers and their white male filmmaker clients. Was pornography too strong to study that it would literally suck me in? By conflating pornography with the underbelly of the sex trade, that seemed to be the insinuation.

“Trauma is not the only thing that motivates sexuality studies; joy and everything in between do too.”

The Social Science Research Council’s Sexuality Research Fellowship Program (SRFP) not only validated my choice to pursue the field of sexuality studies in representation, but the funding and its prestige invalidated the moral panics I encountered. Through the Ford Foundation’s financial support, and the SSRC’s institutional support and endorsement, I was able to visit the Kinsey Institute several times, over a period of two years, to watch one hundred years of pornography in their archives and peruse research materials on the production of hypersexual Asian women in the West. The funding afforded me tickets to the Broadway and San Francisco productions of Miss Saigon in the first and second rows of the orchestra and loge, and to interview its actors several times. It also allowed me to meet with and interview Asian American feminist filmmakers who engage in explicit representations of sexuality. This ethnographic research was indispensable to writing my award-winning first book, The Hypersexuality of Race: Performing Asian/American Women on Screen and Scene,1

Durham, NC: Duke University Press, 2007.More Info → which charted my path as a scholar of sexuality and race in representation. On that journey, I learned that my commitment to my study extends beyond trauma: my research affirms the wide range of sexual experiences, desires, and practices that face and surround us all. Trauma is not the only thing that motivates sexuality studies; joy and everything in between do too.

As I continued to publish sole-authored books and edited anthologies,2→Straitjacket Sexualities: Unbinding Asian American Manhoods in the Movies (Redwood City, CA: Stanford University Press, 2012).
→Tristan Taormino et al., eds., The Feminist Porn Book: The Politics of Producing Pleasure (New York: The Feminist Press, 2013).
→“ The Unwatchability of Whiteness: A New Imperative of Representation,” ed. J. Reid Miller, Richard T. Rodriguez, and Celine Parreñas Shimizu, special issue, Asian Diasporic Visual Cultures and the Americas 4, no. 3 (September 2018). and numerous articles focused on sexuality and race, I toured the country, delivering talks and meeting readers who unabashedly or shyly connected with me by sharing unexpected disclosures. At an open forum in an elite US liberal arts college, a straight, cisgender young man raised his hand to announce that my book gave him permission to buy a dildo for himself. After a keynote talk on a large campus in the middle of the country, women of all ages lined up to confess various struggles with sexuality, an older African American woman reflected on how sexual practices she individually wants to perform are regarded as aberrant in ways that threaten to confirm stereotypes about her group. Two young Asian American women discussed their intimate partners: Should I leave him since I discovered all his previous girlfriends are Asian? How can ours be love? Or how do I counter other women who disapprove of my role-playing colonial dynamics with lovers as a kind of self-harming false consciousness? These questions reveal the complexities of lived sexualities.

One example is The World’s Biggest Gang Bang (1999) with Annabelle Chong, which I analyze in my first book. I study her bodily speech in the context of a white male fantasy production. What I find is that her work in pornography reveals something about the unreliability of the visual. Her performance captures how Asian women’s sexuality stands in for an extreme perversity as defined by others, which she attempts to appropriate by showing through her own face how pain looks like pleasure and vice versa. In the process, she introduces the notion of a consciousness within a body that is both subjugated and actional, indexing the complexity of her own identity in what I call an unexpected monstrous feminism.

“Studying media that generates pleasure, especially through sensitive and challenging representations, illuminates not only media literacy but intimate literacy.”

In an increasingly global world of media images, unflinching looks at discomforting images of racialized sexualities are necessary. My approach remains interdisciplinary, bringing together ethnographies of reception and production with close readings of sexual identities and sexual acts on screen and scene, especially as they relate to structural inequality in history. With the courage found through the support of the SRFP, I continue to ask the same demanding questions about sexuality, race, intimacy, and power in my scholarship today.

In my new book, The Proximity of Other Skins: Ethical Intimacy in Global Cinema,3 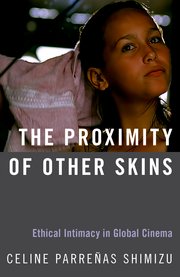 Durham, NC: Duke University Press, 2007.More Info → I go to the site of intimacy across radical inequality to ask questions about the connections and disconnections that occur there: when wounded bodies in poverty entangle with healthy, wealthy bodies in sex, romance, and care; when fear and hatred combine with desire and fetishism. I ask why transnational films like Brillante Mendoza’s award-winning work representing such intimacy and inequality disrupt and disgust Western spectators. What I find is that works from the Philippines and South Korea, and independents from the United States, Hong Kong, and France may not be made for the West and may not make use of Hollywood modes of filmmaking such as panning away from sex scenes. Rather, they demand recognition for the different sexual knowledge they produce beyond our existing frames. The spectator is redirected to go beyond the rapture of consuming the other to the rupture that arises from witnessing pain and suffering in the moment of the sex act. Proximity to intimate inequality in cinema ultimately compels and demands self-displacement so as to establish an ethical way of relating to others. In undoing the spectator who watches scenes of intimacy across radical inequality, the voice of the transnational filmmaker emerges.

Not only do we need to listen to filmmakers from outside Hollywood who unflinchingly engage the inexpressibility of difference, we need to make room for critics and theorists who prioritize the subjectivities of others. Recognizing our culpability in the denigration of others unleashes the power of cinema to expand our understanding of sexuality. We must bear the unbearability of stories we don’t want to watch and don’t want to feel.

Between Scholarship and Social Movements: In Conversation with Jeffrey Juris