For our “Sexuality & Gender Studies Now” series, Brian Donovan, a 2000 dissertation fellow of the SSRC’s Sexuality Research Fellowship Program (SRFP), explains how narratives of sex trafficking and coercion have historically been racialized in the United States. Building on his SRFP-funded research on the Progressive Era’s antiprostitution efforts, which were fueled by fears of “white slavery,” he links this racialized rhetoric of the early twentieth century to contemporary messaging on antitrafficking efforts.

by Brian Donovan July 2, 2019
Print
“From the early twentieth to the early twenty-first century, narratives of sex trafficking have proven to be extremely effective and durable vehicles for racist and anti-immigrant discourse.”

Current concerns about sex trafficking replicate many of the same dynamics between racial purity and white patriarchy first raised over one hundred years ago. One glaring example was when President Donald Trump used sensationalistic narratives of sex trafficking as a central justification to restrict immigration and build a wall on the US-Mexico border. Echoing white slavery rhetoric from the early twentieth century, he claimed: “Women are tied up. They’re bound. Duct tape put around their faces, around their mouths. In many cases they can’t even breathe.” Sex slavery stories also appear in popular US conspiracy theories, including the “Pizzagate” scandal that erroneously alleged that a Washington, DC, pizza parlor was a hub of a sex slavery ring run by high-ranking officials of the Democratic Party. The popular QAnon conspiracy theory, an ideological outgrowth of Pizzagate, maintains that global elites (from Tom Hanks to Hillary Clinton) are united in a satanic sex-trafficking syndicate. Similar conspiracy theories have emerged at a local level, too. In 2016, residents of Twin Falls, Idaho, were in the grip of a moral panic about Syrian refugees abducting white women into sexual slavery, despite the fact that no Syrians had settled in Twin Falls. One Twin Falls resident wrote, “My girl is blond and blue-eyed. I am extremely worried about her safety.” From the early twentieth to the early twenty-first century, narratives of sex trafficking have proven to be extremely effective and durable vehicles for racist and anti-immigrant discourse.

The early twentieth-century United States saw how sex trafficking, framed as “white slavery” narratives, played a major role in advancing racist and anti-immigration policies. Through the SSRC’s Sexuality Research Fellowship Program (SRFP)—one of the most significant and enriching experiences of my academic career—I started researching the Progressive Era’s antiprostitution push.1I use the term “prostitution” here because it is the word reformers, the press, and legal authorities used at the time, but I am aware of its derogatory implications and note the contemporary preference to use the phrase “sex work” to denote sex-for-money exchanges. The fellowship program led to the eventual publication of my first book, White Slave Crusades: Race, Gender, and Anti-Vice Activism, 1887–1917,2 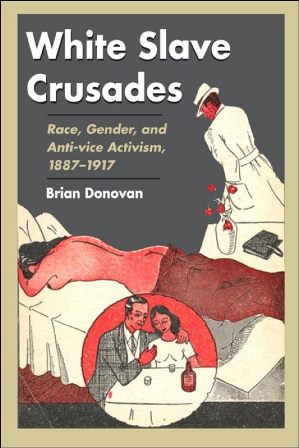 University of Illinois Press, 2006More Info → in which I examine the racial and gender politics embedded in efforts to fight coercive prostitution, or what was called “white slavery.” Using the literature on racial formation and the social construction of whiteness, my research situated Progressive Era antiprostitution crusades within much broader racial projects that created a hierarchy among, and drew boundaries around, so-called “native-born whites,” African Americans, and immigrants. White Slave Crusades examined the intersectional qualities of antiprostitution organizing. Narratives of innocent white girls abducted into sex work formed a justification for anti-immigrant policies and ideologies, but these stories also served as a warning for white women to remain in the domestic sphere.

The case of Belle Moore exemplifies how racism played a role in the antiprostitution movement’s white slavery narratives.3Brian Donovan “The Sexual Basis of Racial Formation: Anti-Vice Activism and the Creation of the Twentieth-Century ‘Color Line’,” Ethnic and Racial Studies 26, no. 4 (2003): 707–727. A mixed-race woman, she was accused of selling two teenage girls into sexual slavery. The New York City assistant district attorney made baseless allegations that Moore abducted and murdered a blue-eyed eleven-year-old girl. At her trial, the “white slaves”—Alice Milton and Belle Wood—were revealed to be experienced sex workers in their twenties who discussed the prospect of working with Moore. Although many commenters viewed the trial as disproving the existence of a vast white slavery “syndicate” in New York City, Moore was eventually found guilty and sentenced to a five-year prison term (the “white slaves” were also imprisoned in a women’s reformatory).

Without question, pimps and procurers entrapped women and girls into prostitution during the Progressive Era. For that reason, I have been cautious about using the phrase “moral panic” to describe the era’s crusades against sex work. At the same time, the efforts to stop “white slavery” share many of the hallmarks of moral panic: crusaders often used misleading statistics and shocking narratives of abduction that obscured the economic context of prostitution, sex work, and trafficking. “White slavery” stories tended to distort the reality of coercive sex work by their emphasis on the whiteness of the victims and the physical aspects of coercion. As revealed in the trial of Belle Moore, the efforts to stop white slavery were about more than sexual violence; they helped build, and were built from, a complex configuration of race, class, and gender projects and ideologies.

“The racist and xenophobic impulses that animated the white slavery scare over one hundred years ago have not withered but, rather, have taken on new forms in the era of globalization and neoliberalism.”

In the last ten or fifteen years, a considerable body of scholarship has examined the racial and gender consequences of antitrafficking efforts. Often operating under the banner of “critical trafficking studies,” these scholars show how antitrafficking measures have been used against sex workers, migrants, and immigrants. Elizabeth Bernstein’s concept of “carceral feminism,” which describes how the criminal justice system’s approach gender-based violence leads to unanticipated problems, has been enormously influential in rethinking human trafficking.4Elizabeth Bernstein, “Militarized Humanitarianism Meets Carceral Feminism: The Politics of Sex, Rights, and Freedom in Contemporary Anti-Trafficking Campaigns,” in “Feminists Theorize International Political Economy,” ed. Kate Bedford and Shirin Rai, special issue, Signs: Journal of Women in Culture and Society 36, no.1 (2010): 45–71. Jennifer Musto’s recent book, Control and Protect, represents a major leap forward in conceptualizing how contemporary organizational responses to sex trafficking are iatrogenic, harming the very people these efforts are purportedly trying to help.5 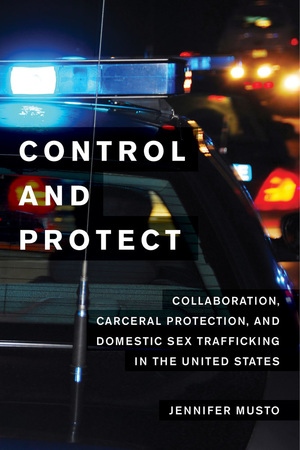 University of California Press, 2016More Info → Studies by Kamala Kempadoo, Jo Doezema, and many others have helped reframe our understanding about human trafficking by focusing on the links among human rights, and social and economic justice.6See Kamala Kempadoo, “Abolitionism, Criminal Justice and Transnational Feminism,” introduction to Trafficking and Prostitution Reconsidered: New Perspectives on Migration, Sex Work, and Human Rights, 2nd ed., eds. Kamala Kempadoo, Jyoti Sanghera, and Bandana Pattanaik (New York: Routledge, 2012), vii–xlii; Jo Doezma, Sex Slaves and Discourse Masters: The Construction of Trafficking (London: Zed, 2010); Sally Engle Merry, The Seductions of Quantification: Measuring Human Rights, Gender Violence, and Sex Trafficking (University of Chicago Press, 2016); Corinne Schwarz, Emily Kennedy, and Hannah Britton, “Aligned across Difference: Structural Injustice, Sex Work, and Human Trafficking,” Feminist Formations 29, no. 2 (2017): 1–25. The racist and xenophobic impulses that animated the white slavery scare over one hundred years ago have not withered but, rather, have taken on new forms in the era of globalization and neoliberalism.

Like the Progressive Era crusades against coercive prostitution, many contemporary antitrafficking efforts are about more than stopping sexual violence. They are used to reinforce borders, both physical and symbolic, to shore up us-versus-them boundaries, and to perpetuate racial and ethnic inequality in the name of protecting womanhood. These insights, historical and contemporary, are crucial for understanding the deeper political work being done by these campaigns purportedly aimed at preventing harm.

1
I use the term “prostitution” here because it is the word reformers, the press, and legal authorities used at the time, but I am aware of its derogatory implications and note the contemporary preference to use the phrase “sex work” to denote sex-for-money exchanges.
2

Brian Donovan is a professor of sociology at the University of Kansas. He is the author of White Slave Crusades: Race, Gender, and Anti-Vice Activism, 1877–1917 (University of Illinois Press, 2006) and Respectability on Trial: Sex Crime Trials in New York City, 1900–1920 (SUNY, 2016). Donovan’s third book, American Gold Digger: Marriage, Money, and Law from the Ziegfeld Follies to Anna Nicole Smith, will be published by the University of North Carolina Press in late 2019. Donovan is a 2000 dissertation fellow of the SSRC’s Sexuality Research Fellowship Program.

Previous article Death Insurance: The PCC and the Protection of Life in the Twilight

Next article Measuring Party Leadership Effectiveness in the US Congress