The End of the American Century: 9/11 Ten Years On

Violence, Law and Justice in a Global Age 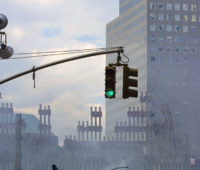 On Sunday, 23rd September 2001, the novelist, Barbara Kingsolver wrote in The Los Angeles Times: ‘It’s the worst thing that’s happened, but only this week. Two years ago, an earthquake in Turkey killed 17,000 people in a day, babies and mothers and businessmen…. The November before that, a hurricane hit Honduras and Nicaragua and killed […]