For more than 95 years, the Social Science Research Council has used the tools of social inquiry to help answer society’s most pressing questions. Often, the know-how necessary for scholarship is scattered among many scholars and across institutions. As such, facilitating partnerships and cross-disciplinary collaboration has always been an essential part of organizing research, particularly when the subject matter is relevant to both the academy and the public interest.

The Social Media and Democracy Research Grants program, a partnership with Social Science One and Facebook, continues the SSRC’s history of innovative and cross-disciplinary collaboration.

From the beginning, the Social Media and Democracy Research Grants program was rooted in innovative collaboration to address the changing realities of data use and access in social science research in recent years. During the twentieth century, the US federal government and academic institutions played a significant role in collecting data and arranging data access for scholars. As many complex social, cultural, economic, and political processes have moved online, however, a great deal of relevant data is now collected by private companies. Enabled by an unprecedented collaboration between industry and academia, this program facilitates researcher access to these data for the purpose of better understanding the impact of social media on our lives.

The granteed projects we announced last month demonstrate the importance of cross-pollinating partnerships.

A team led by Dr. Damian Trilling, assistant professor of communication science at the University of Amsterdam, is investigating “shareworthiness” or the likelihood that a news story—real or fake—will be disseminated on social networks. Working across a broad European context, the team comprises 11 scholars from five institutions in Italy, Germany, the Netherlands, and Poland.

SHARENEWS: Predicting the Shareworthiness of ‘Real’ and ‘Fake’ News in Europe

This kind of collaboration is the norm for this program, with more than half of the project teams drawing on researchers from more than one institution.

The Role of Facebook in Legislative Campaigns in Chile (2017)

One of Dr. Luna’s team members is Dr. Sebastián Valenzuela, who works alongside Dr. Magdalena Saldaña to lead their own two-institution, five-member team analyzing the diffusion of “false news” on Facebook during the same 2017 legislative elections. Dr. Luna is also a member of the Saldaña-Valenzuela-led team.

Associate Professor at the School of Communication & Associate Researcher of the Millennium Institute for Foundational Research on Data, Pontificia Universidad Católica de Chile

Projects that don’t draw on researchers from multiple institutions still bring together the multidisciplinary skills necessary for social data research. A team led by Dr. Pablo Ortellado, a public policy professor at the University of São Paulo, is investigating the demographics of hyperpartisan news sharing in Brazil. Dr. Ortellado is joined by his University of São Paulo colleague Dr. Marcio Moretto Ribeiro, an information science professor.

The Demographics of the Sharing of Hyperpartisan News in Brazil

These collaborative teams will not only work toward a deeper understanding of social media’s impact on democracy in the present, but also an environment where many researchers asking similar questions can build on each other’s work into the future. This program’s specific focus on one area—social media’s impact on democracy—seeks to both answer immediately pressing questions and concentrate those efforts such that methods can be tested and developed and knowledge built. 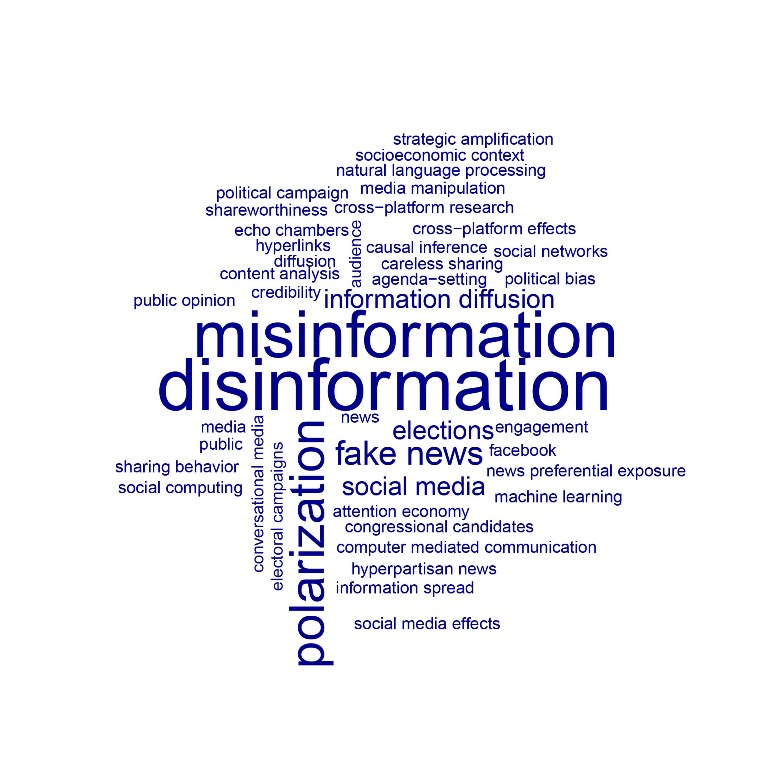 Keywords from the first cohort’s proposals show the program’s concentration of research topics.

“Cross-disciplinary” has become a bit of a buzzword in recent years, but this project’s past, present, and future all depend on people with differing skills, knowledge, and data coming together from different parts of the world to grow knowledge for the public good. This is not only true of this project, but for academia and research as a whole.

For more information on the importance of collaboration in academia in the age of digital data, please see our recently published To Secure Knowledge task force report.

Previous article Predicting the Future of Technology and Power: A Conversation