In 1998, I entered graduate school at the University of New Mexico interested in studying intermarriage and the lives of people of mixed heritage in US history. Introduced to Chicanx history by Ramón Gutiérrez at UNM, I entered a PhD program in history at the University of Michigan to focus on Latinx history and had the great fortune to meet Carroll Smith-Rosenberg. Buoyed by the guidance of both professors, I turned to sexuality research and the links between Latinx history and sexuality. Receiving a 1998–1999 Sexuality Research Fellowship Program (SRFP) dissertation fellowship, with Smith-Rosenberg serving as my project’s mentor, launched my dissertation on sex and race in turn-of-the-twentieth-century New Mexico. Since then the SRFP has animated both my scholarship and my teaching throughout my career.

The fellowship helped me secure a tenure-track position at Oberlin College, where beginning in 2000 I taught classes on Latinx history as well the History of American Sexualities, using John D’Emilio and Estelle Freedman’s invaluable textbook, Intimate Matters: A History of Sexuality in America.1 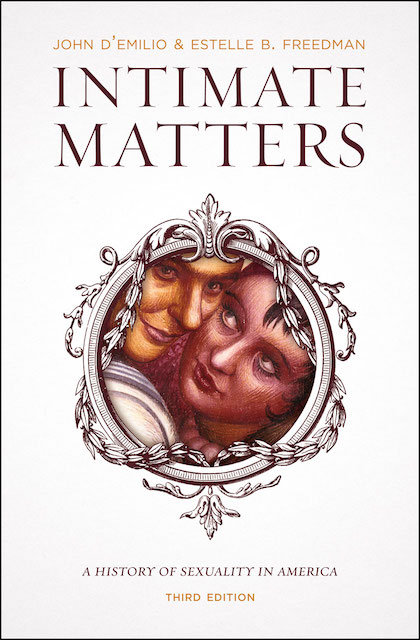 New York: Harper & Row, 1988; Chicago: University of Chicago Press, 2012More Info → Inspired by the mentorship I received at both UNM from Gutiérrez, Virginia Scharff, and Elizabeth Jameson and at the University of Michigan from Smith-Rosenberg, George Sánchez, and Maria Montoya, I sought to collaborate with my students on research projects on sex and race in US history.

Passing on the torch

In addition to its critical scholarly support, the SRFP has also deeply enriched my teaching at Oberlin College. In nearly two decades at Oberlin, I have consistently taught the History of American Sexualities course, a broad survey of the history of sexuality in the United States from the colonial era to the present, as well as teaching upper-level research seminars on sexuality. My Latinx history and US history survey courses, and seminars on Borderlands history and the history of people of mixed heritage in the United States also contain significant content on sexuality.

“Throughout my career, I have been fortunate to work with thoughtful and talented undergraduates on sexuality-related research and writing projects.”

Throughout my career, I have been fortunate to work with thoughtful and talented undergraduates on sexuality-related research and writing projects. Several years ago, Haley Pollack, a history major, served as a research assistant and carefully examined issues of the Lorain Morning Journal from the 1940s and 1950s for discussions of sexuality and race (Lorain, Ohio, is a large industrial city near Oberlin with a substantial Puerto Rican and Mexican population dating back to the 1920s). Haley and I subsequently cowrote a chapter in Beyond el Barrio: Everyday Life in Latino America that focused on sexuality and citizenship in the Latinx community in Lorain in the mid-twentieth century.4“Making ‘The International City’ Home,” in Beyond el Barrio: Everyday Life in Latino/a America, Adrian Burgos and Frank Guridy, ed. (New York: NYU Press, 2010), 149–167.

More recently, Xavier Tirado, a sociology major, and I cowrote a 6,000-word entry on “Latino Sexuality” for the Oxford Research Encyclopedia of American History. Additionally, I am currently cowriting an essay on heterosexuality in ethnic Mexican communities in the nineteenth century US Southwest with Zurisaday Gutierrez Avila, a psychology/sociology double major. Using a newly available database of US Spanish-language newspapers from the 1800s, Zurisaday uncovered and described multiple examples of courtship, marriage, and reproduction in the Mexican Southwest. We hope the essay will be published in the coming year.

Returning to the classroom in the last two years after a period in administration, I am convinced more than ever of the central place of sexuality in the history of North America and the United States. In my newly updated US History survey class, for instance, sexuality will be a major theme throughout the course. Topics such as westward expansion, anti-immigrant and nativist politics, the rise of consumer culture, white resistance to the civil rights movement, and popular, and deeply divergent support, for Presidents Obama and Trump are all enriched by in-depth discussions of sex and sexuality. Similar sexuality-based scholarship, such as Ana Minian’s research on the United Farmworkers union and Susan Stryker’s work on transgender political activism in San Francisco, have strengthened my courses in Latinx and US Western history.

In addition to helping inspire and underwrite important parts of my teaching and scholarship, the SRFP has helped nurture a range of important professional connections and relationships. For instance, Susana Peña—a member of my 1998–1999 dissertation fellowship cohort, and now director of the School of Cultural and Critical Studies at Bowling Green State University—and I have frequently worked together on regional Latinx studies and sexuality-focused workshops. I also worked closely with Marysol Asencio, another SRFP colleague, as she developed and edited her important collection Latina/o Sexualities: Probing Powers, Passions, Practices, and Policies, to which I contributed an essay on the history of Latinx sexuality in the twentieth century.5Pablo Mitchell, “Making Sex Matter: Histories of Latina/o Sexualities, 1898–1965,” in Latina/o Sexualities: Probing Powers, Passions, Practices, and Policies, Marysol Asencio, ed. (New Bruswick, NJ: Rutgers University Press, 2009).

While robust in many respects, the areas of sexuality research (Latinx history, US history, Borderlands history) that the SRFP helped me explore and describe in my teaching and scholarly work nonetheless contain important gaps. Future scholarship in the history of Latinx sexuality would benefit from continued intensive study of Spanish-language newspapers and periodicals. Legal records, like the trial transcripts involving Mexicans and sexuality that I explored in my West of Sex book, are similarly underutilized resources. Such archival documents are rich deposits of information for scholars seeking to recover and examine sex and sexuality in communities of color. In fact, major institutions and funding agencies in the future could provide an invaluable service for continuing sexuality research by sponsoring the digitization of state and local records, like the transcripts of appeals cases, related to sexuality.

“Due in part to D’Emilio and Freedman’s pioneering efforts, ethnic studies scholars have been especially attentive to the role of sex and sexuality in the creation, maintenance of, and, most importantly, challenges to racial inequalities in the United States.”

A new history of sexuality textbook would undoubtedly include the extraordinary range of sexuality scholarship that has been produced in the last 20 years on topics such eugenics, transgender history, intermarriage, gay and lesbian history, and commercial sex work. Due in part to D’Emilio and Freedman’s pioneering efforts, ethnic studies scholars have been especially attentive to the role of sex and sexuality in the creation, maintenance of, and, most importantly, challenges to racial inequalities in the United States. Energized by digital revolutions that have dramatically expanded access to archival sources like eighteenth- and nineteenth-century newspapers and medical and government records, these scholars have propelled the history of US sexuality far beyond the field’s early, somewhat limited, spotlight on black-white racial binaries. In the hopes of sparking interest in a new overview of the history of US sexuality, an organization such as the SSRC could organize a workshop with leading scholars in the field to gauge both interest in the project and the range of historical topics and themes the book would cover. Designing such a textbook for a next generation of students and scholars of the history of US sexuality would be a fitting tribute to both Professors D’Emilio and Freedman and the lasting impact of the Sexuality Research Fellowship Program.

Pablo Mitchell is professor of history and comparative American studies at Oberlin College. He is the author of Coyote Nation: Sexuality, Race, and Conquest in Modernizing New Mexico, 1880–1920 (University of Chicago Press, 2005) and West of Sex: Making Mexican America, 1900–1930 (University of Chicago Press, 2012). A paperback edition of his Latina/o history textbook, Understanding Latino History: Excavating the Past, Examining the Present, was released by ABC/CLIO in 2017. He is also the coeditor of Beyond the Borders of the Law: Critical Legal Histories of the North American West (with Katrina Jagodinsky; University Press of Kansas, 2018). Mitchell was... Read more

Previous article Contemporary Challenges in the Study of Populism: A Workshop on Ideational Approaches

Next article Beyond the Storm: Understanding the “Other” Uncertainty

What’s in Your (Research) Bag? Research Advice and a Glimpse Inside the Bags of SSRC Fellows Azeez Olaniyan and Emma Shaw Crane