Reflecting on her Sexuality Research Fellowship Program experience and how it shaped her career, Lynn Comella explores the evolution of and growth in the feminist sex-toy retail industry since the 1970s. Through ethnographic research across different field sites around the United States, she interrogates how these women-friendly shops and the larger industry around them went from a peripheral phenomenon to mainstream in the span of a few decades, normalizing women’s sex lives and their sexual desires. In her research, she argues that by co-opting consumer culture, sex-positive feminists were able to spread their message of sexual empowerment; however, Comella also highlights potential challenges of “practicing sexual politics through the marketplace.”

At the time, I was a young scholar in the field of communication with a background in ethnography and critical cultural studies. My research on women-run sex shops, such as Eve’s Garden, Good Vibrations, Babeland, and others, was an outlier in a discipline known, at least then, more for its focus on moving images, advertising messages, and media representations. Although I could speak with ease about how my scholarship addressed key concerns in the field—including the production and circulation of sexual discourses, norms, identities, and values—to some, it was curious, unintelligible, or worse, frivolous.

“Although scholarship on the history of pornography as a film genre was beginning to emerge, research on the social and economic organization of the broader sexual marketplace was sparse.”

Durham, NC: Duke University Press, 2002More Info → and devoured everything anthropologist Gayle Rubin—herself another SRFP postdoc fellow (1999)—had written about sexual politics and culture, including her landmark essay, “Thinking Sex: Notes for a Radical Theory of the Politics of Sexuality” and her research on gay male leather culture in San Francisco.2→Gayle Rubin, “Thinking Sex: Notes for a Radical Theory of the Politics of Sexuality,” in Pleasure and Danger: Exploring Female Sexuality, ed. Carole S. Vance (Routledge & Kegan, Paul, 1984).
→“The Valley of the Kings: Leathermen in San Francisco, 1960–1990” (PhD diss., University of Michigan, 1994).
→”Elegy for the Valley of the Kings: AIDS and the Leather Community in San Francisco, 1981–1996,” in In Changing Times: Gay Men and Lesbians Encounter HIV/AIDS, ed. Martin P. Levine, Peter M. Nardi, and John H. Gagnon (University of Chicago Press, 1997).
→”The Miracle Mile: South of Market and Gay Male Leather in San Francisco 1962–1996,” in Reclaiming San Francisco: History, Politics, Culture, ed. James Brook, Chris Carlsson, and Nancy Peters (San Francisco: City Lights Books, 1998). Although scholarship on the history of pornography as a film genre was beginning to emerge, research on the social and economic organization of the broader sexual marketplace was sparse. I knew that commercial forms of sexual culture—sex shops, strip clubs, leather bars, and brothels—were not only popular and profitable enterprises, but they had a great deal to teach us about the social arrangement of sex and intimacy under capitalism, as well as the complicated relationship between gender, race, social class, labor, power, and politics. I was fascinated by these spaces and what they revealed, and I wanted others to share my scholarly enthusiasm.

The SRFP nurtures a field

Receiving the Social Science Research Council’s SRFP dissertation fellowship in 2001 was a game changer for me, transforming not only how I saw myself as a scholar, but how I understood the social value and impact of sexuality research. The fellowship program was the first and only of its kind. With generous funding from the Ford Foundation, its goal was to create a new generation of sexuality scholars whose research would address gaps in a field largely dominated by public health approaches to disease prevention, risk reduction, and reproductive health.

I loved the program’s bold mission and was so eager to be part of it that I slept with a copy of my SRFP research proposal under my pillow from the day I submitted it until the day I learned I had received one of the 11 dissertation fellowships awarded that year.

The SRFP helped many of us who were studying sexuality find each other. Our fellows conference that year was held at the Kinsey Institute at Indiana University, Bloomington, a place I had only read about in books. It featured an interdisciplinary group of fellows—anthropologists, sociologists, historians, psychologists, and epidemiologists—who were researching topics as varied as the biomedical management of intersexuality, sexual dysfunction and Viagra, gay men and kinship, and adolescent sexuality. We toured the Kinsey Institute’s library and artifact collection—oohing and aahing at vintage French ticklers and rare erotic art—and bonded over shared interests in breakout sessions and one-on-one conversations. I had never been part of an academic gathering where everyone was talking about, theorizing, and studying sexuality. It was, in a word, a revelation.

“I conducted six months of ethnographic research at Babeland, a feminist sex shop in New York City where I was trained to work on the sales floor selling vibrators and dispensing sexual information.”

My fellowship enabled me to pursue full-time dissertation research at a number of different field sites across the country with a breadth, depth, and focus that would not have been possible without the SFRP’s generous support. I conducted six months of ethnographic research at Babeland, a feminist sex shop in New York City where I was trained to work on the sales floor selling vibrators and dispensing sexual information. It was a position that gave me a front-row seat from which to observe and interact with the world I was studying. I did research in Seattle and San Francisco and spent time in Austin, Texas, in an effort to better understand what was involved in selling sex toys in a state where, at the time, it was technically illegal to do so. By the end of my fellowship year, I had travelled thousands of miles, written hundreds of pages of fieldnotes, pored over archival materials stored in dusty basement file cabinets and boxes, and interviewed dozens of feminist retailers and sex store employees in an effort to better understand how these businesses, their educational missions, and retail practices differed from more conventional sex shops geared primarily toward men.

When I began my research in the late 1990s, feminist sex-toy stores were a rather loose network of like-minded businesses that were part of, but also somewhat peripheral to, the larger adult industry. By 2008, the women’s market for sex toys and pornography was being heralded by industry insiders as an increasingly lucrative one, and sex-toy manufacturers and retailers that had previously not paid much attention to female shoppers were scrambling to woo them, often turning to feminist sex shops for inspiration. These changes did not happen overnight, but were the result of decades of work on the part of women-friendly sex shops to help create the conditions whereby it was okay for women, of any age and all walks of life, to explore their sexuality and take control of their orgasms. Rather than winding down, my research expanded to address these shifts, finally culminating in the publication of Vibrator Nation: How Feminist Sex-Toy Stores Changed the Business of Pleasure in 2017.3 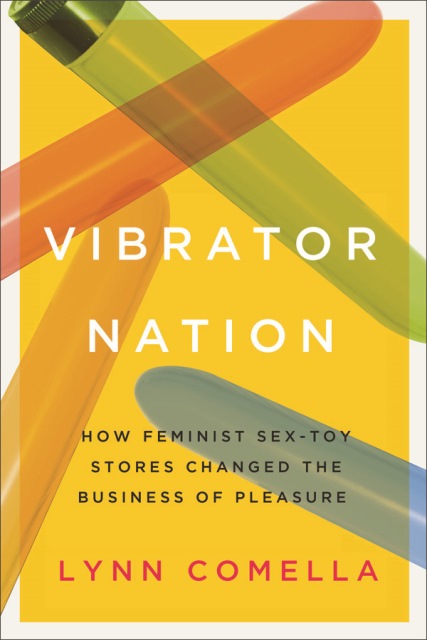 Vibrator Nation reveals a number of things about the history of sexuality in the twentieth century, including the ways in which sex-positive feminists tapped into the logic of consumer culture as a way to spread their message of sexual empowerment and education. It also demonstrates the challenges that come with practicing sexual politics through the marketplace, especially when financial survival is not always commensurate with progressive values. My research shows that portraying the adult industry as inherently sexist and exploitative obscures the ways in which women, queer people, and other marginalized groups have used it to create alternative spaces that can foster a sense of community and belonging in a world that remains largely sex negative.

“An important part of every fellow’s proposal was a dissemination plan: how would we make our research findings known to others?”

The SRFP helped give me an identity as a sexuality scholar and, as such, provided me with a conceptual framework to talk about my research to interdisciplinary audiences. It also showed me the value of communicating beyond traditional academic contexts. An important part of every fellow’s proposal was a dissemination plan: how would we make our research findings known to others? I was encouraged to think about how I could amplify my research results, challenge sexual myths and misconceptions, and expand cultural conversations about sexuality, lessons I still use today in my interactions with journalists and my writing for popular media outlets. Over the years I have written about topics as varied as the sex worker rights movement, the state of sex education in Nevada, feminist and queer pornography, the world of adult webcamming, the business of sexual lubricants, sex robot brothels, and more, for both local and national media outlets, extending conversations about sexuality beyond the university classroom.

Sexuality research in the present

Sexuality research is also finding important institutional support not only in the form of tenure-track academic appointments and course offerings, but in academic journals and professional organizations, too. In 2014 Routledge launched the first academic journal devoted to pornography, Porn Studies; that same year, the Adult Film History Scholarly Interest Group was founded as part of the Society for Cinema and Media Studies. More and more academic presses are realizing there is a market for well-researched books about the sex industry and are building their lists accordingly. These books are, in turn, winning awards and garnering mainstream media attention in places like the New York Times, The Atlantic, Rolling Stone, and elsewhere.

As for me, I am increasingly interested in the “sex tech” movement and the ways in which the future of sex is imagined, mediated, and regulated by creators, journalists, and policymakers. Sex tech innovators, especially women, have found a media-friendly framing to discuss sexuality in ways that are both serious and respectable, rescuing it from the realm of the salacious and marrying it to the earnest world of technological advances and the promise of better sex, greater intimacy, and reconfigured gender relations in the tech space and the bedroom.

The SRFP played a role in these various transformations. Although 2006 marked the end of the program, its imprimatur helped legitimize and expand the field of sexuality research in new and innovative ways, opening doors for scholars such as myself that might have otherwise remained closed. The program’s stewards made a forceful case for why sexuality research matters and their vision and purpose continue to inspire me today.

Next article Household Water Insecurity: Uncertainty around the Tap

Isolated Research, Mortuary Practices, and the Covid-19 Pandemic:
A Conversation with Sohini Chattopadhyay