Samantha Agarwal, a 2020 International Dissertation Research Fellowship grantee, is the IDRF fellows’ winning pick for the 2021 IDRF Photo Competition in the category of “Photo Essay.” In this interview, Agarwal shares reflections on her photo essay “Women Unite to Fight the Right! Scenes from One of Many Anti-Modi Protests,” in which she captures social movements in times of isolation, her current dissertation research, and the Covid-19 pandemic. 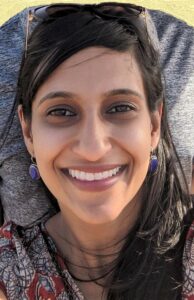 Samantha Agarwal is a PhD student in the department of sociology at Johns Hopkins University. Her dissertation research focuses on political parties, identity formation, and political economy of caste with a geographical focus on India. She has teaching experience in the areas of international development, social theory, and sociology of medicine. When she is not at work, Agarwal likes to hike the Appalachian Mountains and volunteer for various activist projects in Baltimore.

What is your current research?
The surge in far-right political movements worldwide—from Brazil to the United States to India—has dredged up Second World War–era debates about fascism and the conditions under which it arises. One of them has involved the apparent affinity between two ideological currents that are often seen as polar opposites on the political spectrum (far right, i.e., ultranationalist, nativist, and far left i.e., socialist, communist, anarchist). Existing explanations for political defections from left to right (or vice versa) have pointed to the ideological parallels between some versions of socialism and right-wing authoritarianism, including their contempt for liberal establishment. However, when it comes to explaining why individuals switch their allegiances from one side to the other (e.g., from far left to far right), the literature has been limited by: elite bias; first person/ biographical emphasis on individual leaders (e.g., Mussolini) as opposed to third person/collective behavior; and psychological or ideological factors over sociological foundations.

My research approaches this question by drawing on fieldwork and secondary material on political party members in Kerala, a subnational state in India where a left-wing political bloc has been dominant for over half a century. In particular, I examine the political subjectivities of Dalits, a proletarianized and socially marginalized community that has historically been a reliable constituent of the left-led social bloc but have recently begun to defect to a right wing ethnonationalist movement led by the Rashtriya Swayamsevak Samiti (RSS) and the Bharatiya Janata Party (BJP). This is a particularly curious phenomenon, seeing as how the RSS and BJP have historically appealed mostly to elites, and in particular to high caste Hindus (who have for centuries exploited Dalits as cheap/free labor and viewed them as “untouchables”). Using the city of Trivandrum as a case study, my research probes the motives for these defections and attempts to situate them in a larger set of social forces set into motion over the course of the twentieth century. I also draw on interviews with members of the Communist Party of India (Marxist) to understand the left’s response to these formidable challenges.

In your moving photo essay, “Women Unite to Fight the Right! Scenes from One of Many Anti-Modi Protests,” you capture community activism during pandemic times in the midst of growing ethnonationalism in India. How has the Covid-19 pandemic impacted political engagement and insurgent protest in India?
Since the reelection of the Narendra Modi-led government in 2019, the BJP has moved with alarming speed to consolidate the Hindu nationalist agenda . As followers of “Hindutva” the ruling party espouses the view that India is a nation meant exclusively for Hindus and they reject the “secularism” that is enshrined in India’s constitution. The passage of a new citizenship law in the winter of 2019 was arguably the regime’s boldest step toward this vision to date. Together, the Citizenship Amendment Act (CAA) and National Register of Citizens (NRC) would in essence purge from the national citizenship rolls anyone who could not provide documentary evidence of their citizenship. It would simultaneously give an easy pathway to citizenship to “religious minorities” from neighboring countries. Conspicuously missing from the list of eligible minority groups are Muslims. There is a tremendous fear that these reforms would disproportionately impact the poor—who tend to lack official documentation—and be weaponized against the 200 million Indian Muslims, and other minority groups.

In this photo essay, I wanted to lift up the voices of women, in particular working-class Muslim women, whose prolonged sit in/encampment in the winter and spring of last year (2019–2020) against the CAA-NRC marked an important turning point for the Indian polity. These protests were significant, not least of all, because of the grave risks and sacrifices made by the protestors—including shielding unarmed men from police brutality and braving Delhi’s harsh winter on the pavement with their babies wrapped in their arms—but also because in the Hindutva imagination, Muslim women are a community without agency. During the demonstrations such stereotypes were propagated by political leaders like Yogi Adityanath, the BJP Chief Minister of the largest state in India. “Muslim women don’t even know what the CAA is” and “they are doing this only because their men put them up to it,” he jeered. So, in a way these women with their bravery, organizational skills, and might have shattered many of such pejorative stereotypes.

I also think that the protests had the effect of infusing life into the broader field of political resistance. Watching the BJP/RSS expand to all corners of civil society and terrorize marginalized populations and political dissidents with complete impunity, many of the nation’s change-makers have grown quite disheartened about the possibilities for change. The protests against the CAA-NRC, in this context, I think were a turning point—an interruption to the despondency.

Of course, the pandemic has had its own effect on the resistance and on the lives of the demonstrators. The BJP government, which has been criticized for its unhurried response to the pandemic, acted with unusual urgency to forcefully evict masses of people from the protest sites. While this was certainly a big setback, the major victories that came from the struggle—including several subnational states making legislative resolutions against the implementation of the new laws—remain intact.

On top of that, within less than a year another wave of protest erupted, this time by millions of farmers and workers. The sacrifices that were made by the anti-CAA/NRC movement, and its general spirit of democracy and anti-authoritarianism is now being reflected in the resistance against the liberalization of agricultural markets. The farmers’ protests will soon cross their one-year mark, and they show no sign of losing heart.

Have the ongoing events of this pandemic prompted new reflections on your work?
Watching the pandemic unfold in Kerala (from afar) revealed to me some of fascinating aspects of the political society in Kerala. Not least of all, the Left Democratic Front (LDF) coalition government showed its ability to handle the health emergency with incredible efficiency. And while I do think there are some major contradictions in the state’s left government’s project, particularly with regard to large and growing social inequality, there is no denying that Kerala put the rest of the country—and even many Western nations—to shame in their pandemic relief efforts.

In the 2021 assembly election, they were rewarded for their efforts by a sweeping electoral victory over their center-right rivals. This episode prompted me to write an article analyzing the history of Kerala’s development agenda and how an extensive network of grassroots activists working with and alongside the party has facilitated their successes in the fields of health and education. I am glad I wrote this piece because it led to several generative debates and discussions with other sociologists and South Asian scholars.

You had to alter your research methodology to prioritize both your own as well as your community’s health and safety. Can you describe the shift to physically distanced research methods and how it may have redirected your project?
My research design has undergone a complete metamorphosis as a response to the challenges thrown up by the pandemic. Because of my inability to continue in-person fieldwork I was forced to drop a big comparative component of the project. I have also moved from interviewing rank-and-file members of political parties in Kerala—who I have been unable to connect with virtually—to conversing with political leaders and experts—who are more available online. Many of these changes were initially agonizingly difficult for me to accept, but I am now quite excited about how the project is evolving.

Where do you see your research going from here?
Ideally, I would like to return to Kerala and tie all the loose ends. Whenever I have the opportunity to conduct the next round of fieldwork, I will include a comparative element, but I have not quite worked out the details. West Bengal stands out as a potential candidate because it, like Kerala, is a state where the Communist Party was dominant for several decades and there has recently been a large number of defections to the BJP.

Next article Isolated Research, Mortuary Practices, and the Covid-19 Pandemic:
A Conversation with Sohini Chattopadhyay

Rupturing Research: A Reflection on Collaborative Research on the Blue Economy during a Pandemic

For Whom is the City a Border? From Colonial Space-Making to Postcolonial Governance in Mumbai