Mark Turin (PhD, Linguistics, Leiden University, 2006) is an anthropologist, linguist, and an associate professor at the University of British Columbia. He is cross-appointed between the Institute for Critical Indigenous Studies and the Department of Anthropology. From 2014 to 2018, Turin served as chair of the First Nations and Endangered Languages Program and from 2016 to 2018, as acting codirector of the University’s new Institute for Critical Indigenous Studies. He has served as a Wall Scholar at the Peter Wall Institute for Advanced Studies at UBC. Before joining UBC, Turin was an associate research scientist with the South Asian Studies Council at Yale University, and the founding program director of the Yale Himalaya Initiative. From 2007 to 2008, he served as chief of Translation and Interpretation at the United Nations Mission in Nepal (UNMIN). Turin directs both the World Oral Literature Project, an urgent global initiative to document and make accessible endangered oral literatures before they disappear without record, and the Digital Himalaya Project which he cofounded in 2000 as a platform to make multimedia resources from the Himalayan region widely available online. Together with Sienna Craig, Turin edited HIMALAYA, the longest running, open access, interdisciplinary, peer-reviewed journal of Himalayan studies, 2012–2017. 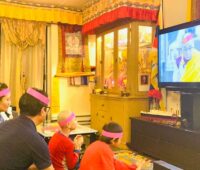