Shibaji Bose works at the intersection of climate change and health systems on issues of migration, extreme events, water, and sanitation. Bose’s work draws on long-term visual ethnography in remote and challenging geographies to inform policy. A former journalist, he has extensively worked for more than two decades in climatically fragile zones in South Asia with Institute of Development Studies at the University of Sussex, Norwegian University of Life Sciences, STEPS Centre, Johns Hopkins-led research consortiums, and has advised visual research initiatives in Italy, Ethiopia, Kenya, Tunisia, Tibet-China, Nepal, Bangladesh, and India. He has contributed to articles on health systems and climate change in The Lancet, Indian Anthropologist, BMC Health Services Research, BMJ Global Health, International Journal for Population, Development and Reproductive Health, Regional Environmental Change, and IDS-STEPS Centre Working Paper. He has written extensively for The Statesman, The Economic Times, Hindustan Times, Geography and You, and in SouthAsiaDisasters. Alongside his interests in mediating between dominant and implicit narrative spaces, he has cocurated photo voice exhibitions, directed films, and his works have featured in Wellcome Trust and Cannes Film Festival and Health Systems Global symposiums in Cape Town, Vancouver, and Liverpool. He has been a global trainer on media and policy for UKAID funded projects. 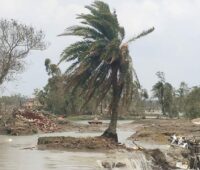 Shibaji Bose, Upasona Ghosh, Debojyoti Das describe the impact of the dual crises of Covid-19 and accelerating climatic change for Sundarbans residents, as well as their experience in shifting to participatory visual research methods to document the crises and residents’ responses, while respecting travel restrictions. The results put documentation in the hands of the affected community and offered a chance to tell their stories from a firsthand perspective. The researchers also reflect on how to make this type of work rigorous, while centering the questions and perspectives of the focus community.