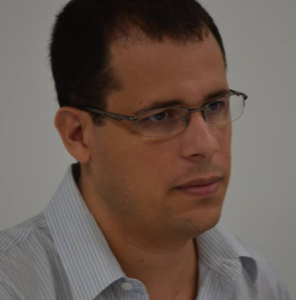 October’s installment of our Six Questions series spotlights Social Media and Democracy Research grantee Pablo Ortellado. Dr. Ortellado, along with his team at the School of Arts and Sciences at the University of São Paulo, is investigating the age demographics of social media users who shared mainstream and hyperpartisan news in Brazil in 2017 and 2018.

Six Questions: The Demographics of the Sharing of Hyperpartisan News in Brazil
Pablo Ortellado, Professor of Public Policy, School of Arts and Sciences (EACH-USP), University of São Paulo

What trends have you seen in your research?
There has been a lot of debate recently about the impact of social media on democracy in regards to political polarization, especially the effects of echo chambers allowing people to relate predominantly to others with similar views. We’ve also seen social media lead to the consolidation and strengthening of political identities when organized political groups are rewarded with recognition for engaging in certain political behaviors.

What are the core concerns you hope your research will address?
Our primary focus is understanding the demographics of social media users who share hyperpartisan news. We’ve observed several clues so far indicating that older people are sharing more hyperpartisan and distorted news while their younger social media counterparts are sharing more news from traditional outlets. While this seems to be the case in many places outside of Brazil as well, we still don’t have a good explanation as to why.

What has motivated you to pursue this research?
The 2013 protests across Brazil completely reorganized the country’s political system. As we looked at how social media was affecting the political sphere, it became clear to us that social media was also connected to political mobilization—there were similar processes in both what was happening on social media and what was happening on the streets of Brazil. Since then, we’ve been thinking of ways to relate these two phenomena by analyzing data collected from social media, especially Facebook, along with survey data from protesters.

What prior knowledge and tools from past research are you bringing to this project?
We’re using data provided by Facebook to try to connect the information we have about different shared links to see how users are engaging with them, and then linking this with other findings from our earlier research. This includes previous surveys of political demonstrators and the general public after the 2013 protests, which we conducted to see if we can identify similar patterns between political discourse online and the action taking place in the streets. We know that prior to the protests the public sphere wasn’t so polarized, so now we want to know why these protests triggered this polarization and why older people appear to be leading the process.

What outcomes are you expecting from this research?
The evidence we’ve seen so far has indicated that we’ll likely find an age pattern among social media users who share hyperpartisan news stories, particularly among older users. Research done elsewhere points to a lack of ability to use new technology, cognitive differences, or connections to the first age of the culture wars in the 1960s and 1970s as reasons for these patterns. It’s possible that these generational experiences have impacted the ways certain age groups interact within the political sphere online. We’re expecting more data could perhaps give us a better idea to confirm whether or not this is actually happening and then to explain why.

What’s next for your research?
We are currently in the process of categorizing the links we have access to by providing them with tags. Once we receive a new dataset, we will relate those tags to the demographics that we’re looking at in order to see what happens next. Hopefully, we will then be able to tell definitively which age demographics are sharing more partisan news, which are sharing more mainstream news, and the reasons why.

Trump and the United Nations

Predicting the Future of Technology and Power: A Conversation

Basic Research and Its Challenges in East Africa