Reconnection through Transportation: A New Measure of America Report

In designing solutions to youth disconnection—young people who are both out of school and out of work—the issue of transportation may not immediately come to mind. Yet, a new report by the SSRC’s Measure of America program, Making the Connection: Transportation and Youth Disconnection, investigates the role lack of transportation infrastructure and services play in the lives of disconnected youth. Here, Kristen Lewis, the report’s author and Measure of America’s director, and Clare McGranahan summarize the report’s findings. While disconnection continues to decline post-recession, the pace is slow and youths of color are disproportionally affected. The report provides suggestions for how greater access to public transportation can improve youth reconnection.

by Kristen Lewis and Clare McGranahan May 21, 2019
Print

Seven years ago, when the Social Science Research Council’s Measure of America program began calculating the country’s youth disconnection rate—the percentage of people between ages 16 and 24 who are neither working nor in school, we discovered an alarming surge in the number of disconnected young people in the United States: from 5 million in 2008 to a height of 5.8 million in 2010 in the aftermath of the Great Recession. Each year since then, as the country’s economy recovered, the youth disconnection rate has declined.

“Reducing youth disconnection requires an understanding of the structural factors driving it.”

The latest data, published last month in our most recent report, Making the Connection: Youth Disconnection and Transportation, shows that this trend is continuing—the rate fell yet again between 2016 and 2017. But the drop, from 11.7 percent to 11.5 percent, was negligible. What’s more, while the overall rate is improving, not everyone is experiencing the benefits; our research over the years has shown time and again that youth disconnection is closely linked to race and location. For black teens and young adults, the national disconnection rate increased between 2016 and 2017, from 17.2 to 17.9 percent, and significant gaps persist between the United States’ major racial and ethnic groups and between different regions, states, and metro areas. This shows that solving the problem of youth disconnection requires more than a healthy economy. Reducing youth disconnection requires an understanding of the structural factors driving it. That is why, in Making the Connection, we highlight a key structural cause of disconnection (and a key barrier to reconnection): transportation infrastructure and services.

Many of the factors contributing to youth disconnection are deeply ingrained in US society—discriminatory practices, residential segregation,1In an earlier report on youth disconnection, Measure of America found that in metro areas that are highly segregated by race, black youth tend to have higher-than-average rates of disconnection, whereas white youth tend to have lower-than average rates of disconnection. and mass incarceration2Nearly 20 percent of disconnected black boys and young men are institutionalized, nearly three times the rate for disconnected white boys and men; the majority of those institutionalized are in juvenile detention, jail, or prison—a fact that will create barriers to employment in the future. all have a hand in keeping disadvantaged youth out of school and work, and there are no quick and easy fixes to these challenges. Tackling these problems is essential, but in the meantime there are some simple solutions that could make a difference in the lives of young people struggling with disconnection. For one thing, youth reconnection efforts need to take into account the practical, everyday expenses and needs that make employment and school attendance difficult. Understanding which groups and communities are most vulnerable to disconnection, and the specific barriers they face, is the first step toward developing effective policies and interventions tailored to their needs. Access to reliable, affordable transportation is a basic necessity for holding down a job or going to class—a necessity that young people have unequal access to.

Take, for example, New York City, where subway fares are rising and subway access varies widely by neighborhood. NYC’s bike share system, Citi Bike, would appear to be a welcomed, affordable alternative in areas with limited subway stops and unreliable bus routes. Using 2017 Citi Bike data, we analyzed where riders between the ages of 16 and 24 were initiating their bike rides. Were young people in neighborhoods with high disconnection rates using Citi Bike? By and large, they were not. To start, Citi Bike docking stations are concentrated in neighborhoods with some of the lowest rates of youth disconnection, with almost no stations in the Bronx, Staten Island, or the eastern parts of Brooklyn and Queens (See Figure 1). In neighborhoods with high youth disconnection that do have docking stations, we found a moderate negative correlation between the numbers of teen and young adult riders and the rates of disconnection in that location. In other words, neighborhoods with more 16- to 24-year-old Citi Bike riders have lower rates of youth disconnection. This is not a causal effect, but it says something important about the placement of the docking stations—namely, that they are not aligned with the need to connect disconnected young people to school and jobs. This is just one example of how efforts that would appear to help everyone in fact end up shortchanging those who need the most support. 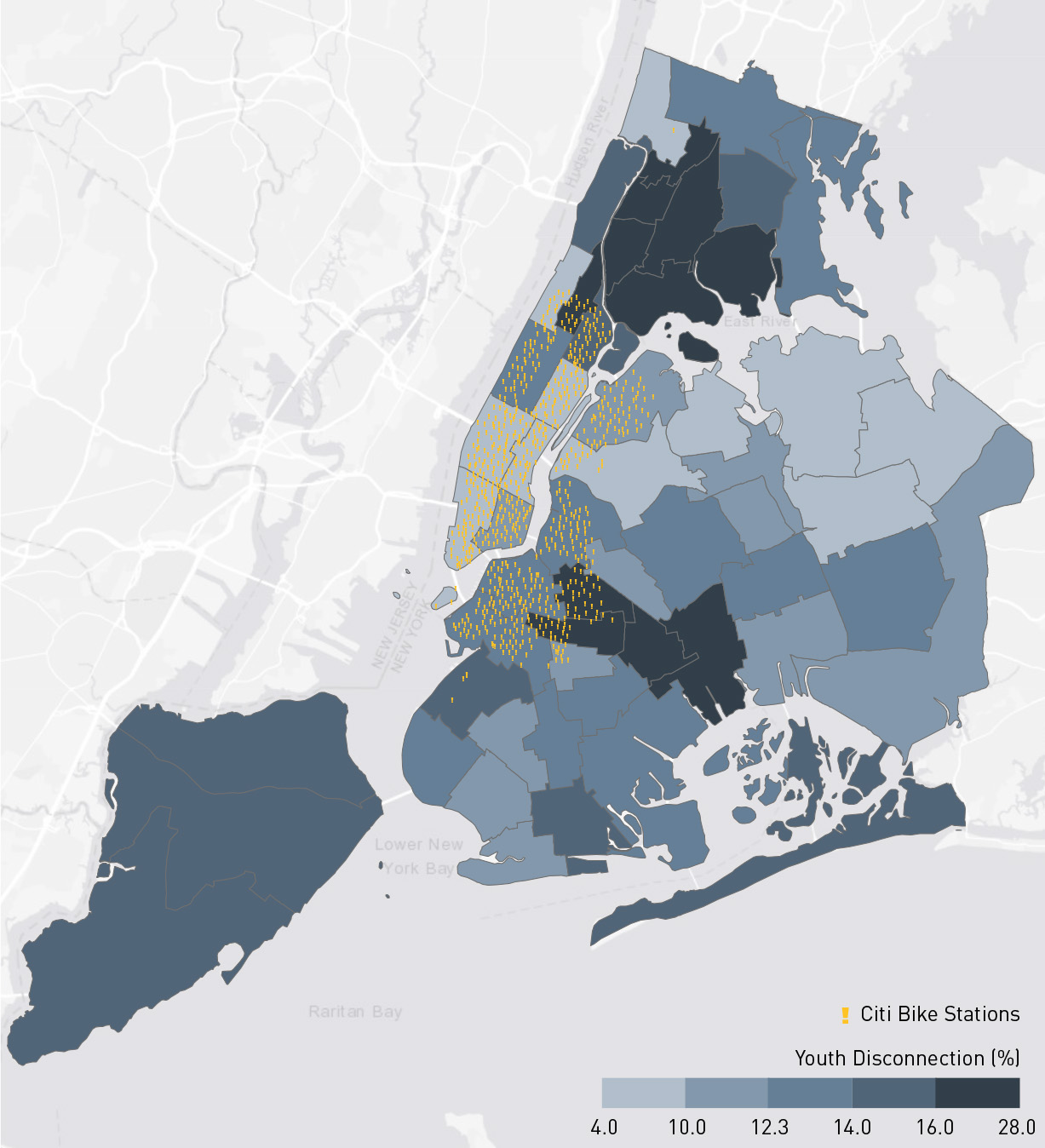 For most young people who experience a period of disconnection, being out of school and unemployed isn’t simply a bump on an otherwise smooth path to a successful adulthood. On the contrary, recent Measure of America research has shown that the effects of youth disconnection can be measured over a decade later, when the once-disconnected are in their thirties. In a longitudinal study, we found that adults who experienced disconnection in their youth earned less and were less likely to be employed, own a home, or report good health when they were in their thirties than demographically similar people who had been in school or the workforce between the ages of 16 and 24. Failing to help young people who are or are at risk of becoming disconnected is setting them—and society at large—up for further difficulties down the road. These findings make youth disconnection all the more urgent.

Like previous reports in our Youth Disconnection series, Making the Connection also presents a breakdown of the latest available youth disconnection data by race and ethnicity, gender, region, state, and metro area and offers recommendations for addressing disparities in transportation access as well as other drivers of disconnection that we have identified through our research and work with stakeholders over the years.3Kristen Lewis, Making the Connection: Youth Disconnection and Transportation (Brooklyn, NY: April 25, 2019), 24–29. While large-scale light rail and subway projects are politically difficult and expensive, providing free transit passes, subsidizing ride share services, and adding bus lines are less so. Average monthly transit passes in the ten largest American cities range in cost from $68 in Baltimore to $122 in Los Angeles—from $2 to $4 a day. This small sum should not create an insurmountable obstacle to opportunity in the richest country in the world.

“Keeping the youth disconnection rate on a downward trajectory and closing the gaps will require close collaboration between sectors, as well as close attention to those who are most vulnerable.”

Limited transportation access is only one among myriad barriers to reconnection, and it’s often a symptom of larger-scale problems in our society—residential segregation, poverty, neighborhood disinvestment, rural isolation, and unequal political power. Ultimately, a holistic approach is most effective when it comes to addressing youth disconnection. We conclude Making the Connection by highlighting some organizations that are doing promising work in this area.4Among these organizations are the King County Reengagement Provider Network in Washington state, the Nashville Opportunity Youth Collaborative in Tennessee, and the Aspen Institute Opportunity Youth Forum. The organizations tackling youth disconnection are diverse, but the most successful ones share certain key characteristics: they take a collaborative approach to the issue, bringing together various stakeholders and sectors; and they solicit input from the people most impacted—disconnected youth themselves. Keeping the youth disconnection rate on a downward trajectory and closing the gaps will require close collaboration between sectors, as well as close attention to those who are most vulnerable.

1
In an earlier report on youth disconnection, Measure of America found that in metro areas that are highly segregated by race, black youth tend to have higher-than-average rates of disconnection, whereas white youth tend to have lower-than average rates of disconnection.
2
Nearly 20 percent of disconnected black boys and young men are institutionalized, nearly three times the rate for disconnected white boys and men; the majority of those institutionalized are in juvenile detention, jail, or prison—a fact that will create barriers to employment in the future.
3
Kristen Lewis, Making the Connection: Youth Disconnection and Transportation (Brooklyn, NY: April 25, 2019), 24–29.
4
Among these organizations are the King County Reengagement Provider Network in Washington state, the Nashville Opportunity Youth Collaborative in Tennessee, and the Aspen Institute Opportunity Youth Forum.

Kristen Lewis is codirector of Measure of America and coauthor of two volumes of the Measure of America (Columbia University Press, 2008 and NYU Press, 2010), as well as well-being reports for California, Louisiana, Mississippi, and Marin and Sonoma Counties. Before founding Measure of America with codirector Sarah Burd-Sharps in 2007, Lewis was senior policy advisor to the water and sanitation task force of the UN Millennium Project, led by Jeffery Sachs, and was coauthor of the task force report, Health, Dignity and Development: What Will It Take? (Earthscan, 2005). She previously worked at the United Nations for many years,... Read more

Clare McGranahan is the editor for the SSRC’s Communications Department. She graduated from Wesleyan University in 2013 with a BA in religion and philosophy. Before joining the SSRC she interned for Island Press’s Production Department in Washington, DC.

Previous article Dehumanization and the Normalization of Violence: It’s Not What You Think

Next article How Fear and Anger Impact Democracy