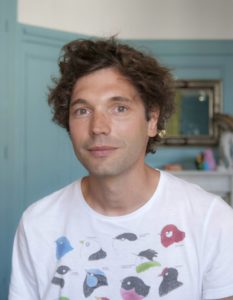 This month’s Six Questions series spotlights Social Media and Democracy Research Grantee, Jean-Philippe Cointet. Dr. Cointet and his team based at the Sciences Po médialab in Paris, France, seek to discover and analyze how the news diets of social media users influence their worldviews, particularly in the wake of the Yellow Vests movement in France.

Six Questions: “I Read It on Facebook”: How Do Conversations on Social Media Escape the Agenda-Setting of News Media?
Jean-Philippe Cointet, Associate Professor, Sciences Po médialab

What trends have you seen in your research?
My team and I are questioning the stability of the public media space in France. Until now, we’ve been studying the ways various media sources cite one another, in addition to the ways certain stories spread on Twitter. In many ways, the global picture that emerges from our first analysis is that these media structures do not show the same degree of political polarization that we see in the United States, for instance. Through observing media websites and Twitter, it still seems that the French media system is quite coherent, with a strong core of mainstream media that are still extremely authoritative over any alternative sources of information.

What are the core concerns you hope your research will address?
We were previously able to estimate the audience size of media websites and measure the influence of news stories on Twitter, but we were unable to observe news consumption practices in more private spaces like Facebook. This project will hopefully bridge this gap, allowing us to investigate and quantify the ways news media are being consumed by Facebook users by looking at the kinds of content users are being over or underexposed to.

What has motivated you to pursue this research?
Most of our motivation in this project stems from the Yellow Vests movement in France. Many people view this movement as a major threat to democracy, in the sense that it’s not only a criticism of traditional institutions, but also a criticism of the traditional media. Understanding how these political advances and activist movements have taken root on social media amidst growing distrust in mainstream media has been a driving force behind my pursuit of this research.

What prior knowledge and tools from research you’ve done in the past are you bringing to this project?
We started working on this subject area about two years ago using infrastructure built by our partners at the Berkman Klein Center for Internet and Society at Harvard and the MIT Center for Civic Media to collect all the content shared by every single news outlet in France on a daily basis. We then used this information to try to measure how widespread and popular these stories were on Twitter. We’ve also used national statistics about each news outlet’s audience along with aggregated data captured from Facebook to give us a better idea of the number of approximate shares for each post.

What outside research has influenced yours?
Berkman Klein researchers Rob Faris, Yochai Benkler, and Hal Roberts have asked similar questions about the polarization of the US media space and we’ve been in regular discussion with them throughout our research. We’re also using the same infrastructure they use to measure political sentiment in the United States in order to measure political sentiment in France, and to find any similarities between the countries’ media structures.

What outcomes are you expecting from this research?
If we discover a strong disconnect between news circulated on social media and news shared via mainstream sources, this could mean that people are more likely to be exposed to very different content depending on the technology they use to read the news—which could have major political consequences. We could also potentially observe that people are exposed to a balanced diet of news, which would certainly say something positive about the regulation of the news landscape in France.

What’s next for you in your research?
We are currently collecting posts that were shared in public social media groups related to Yellow vests and measuring how these news stories have been shared and commented on in different groups on Facebook. We’ve already seen a strong disjunction between the kinds of news related to the Yellow Vests as shared on Facebook compared to that being shared on Twitter, but what we’re most interested in is how pervasive those news stories are within the entire social network, including shares in more private settings.

Previous article Pidginization and Creolization of Languages: Their Social Contexts

How Drug Courts Fall Short: A New Report Investigates this Policy Model’s Performance in the Americas