A 1997 postdoc fellow of the SSRC’s Sexuality Research Fellowship Program (SRFP), Arlene Stein details her SRFP-funded research on antigay social mobilization in rural Oregon in the late 1990s for our “Sexuality & Gender Studies Now” series. Stein studied how some individuals, whom she calls conservative moral entrepreneurs, persuaded these communities to attribute their worsening economic situation to “elites” and, in particular, gay and lesbian people. Reflecting on this research, Stein asserts the importance of sexuality research and how it can help us understand current political and social dynamics.

“Emergent social movements that come into being as new frontiers of sexuality and gender develop or gain new relevance.” This was one of the key research areas the Social Science Research Council’s (SSRC) Sexuality Research Fellowship Program sought to explore, funding a group of scholars from diverse disciplines to do it. I was among them. My work investigated how Christian conservative movements were making inroads into rural America, and how local citizens resisted their efforts.

“Why, in small communities where it was all but invisible, did sexuality become such a polarizing issue?”

In 1997, I began to interview dozens of residents in a small town in central Oregon (which I call Timbertown) that had been swept up in a local populist rebellion, part of a statewide campaign against gay and lesbian rights. Timber-based communities such as this one became laboratories for a right-wing populism that appealed to nostalgia, exploited people’s fears and distrust of elites, and turned neighbors against one another. In a two-year long ethnographic study of religious right campaigns in the Pacific Northwest against gay and lesbian rights, which entailed extensive interviews with residents and archival research, I tried to answer: What gave rise to such campaigns? Why, in small communities where it was all but invisible, did sexuality become such a polarizing issue? And, finally, how did “culture wars” battles such as these impact communities?

For generations, the lumber industry in the Pacific Northwest had created jobs that were secure, unionized, and paid enough to support a family. A sense of economic security made rural Oregon a pretty live-and-let-live sort of place. But in the 1980s, automation, tougher environmental regulations, a sluggish national housing market, and the availability of new global supply chains led to the collapse of the local timber industry.

While the city of Portland enjoyed a high-tech-fueled upswing, middle-aged men and women in rural Oregon were forced to settle for low-paying service-sector jobs or leave their hometowns in search of work. People started camping in vans, thrift stores cropped up everywhere. A single mother told me that she resented poor people who used food stamps to buy avocados. “I can’t afford avocados,” she said, “but they’re buying them like there’s no tomorrow.” She and others were critical of what they saw as the “undeserving poor,” and they felt ill-served by a government they believed colluded with these “money takers” while hardworking taxpayers like them struggled just to get by. Echoing longstanding, racially coded conservative tropes such as the “welfare queen,” my interviewees believed that “productive” members of society like themselves were forced to subsidize the “parasites.” They viewed liberal elites and sexual minorities as overlapping groups of outsiders who posed a threat to their way of life.

“Conservative residents had become convinced that affluent sexual ‘strangers’ were fighting for ‘special rights’ and threatening the well-being of their families.”

Conservative moral entrepreneurs—individuals who encouraged others to follow their moral stances—sponsored a series of ballot measures1For example, the 1992 Oregon Ballot Measure 9 decreed, among other things, “This state shall not recognize any categorical provision such as ‘sexual orientation,’ ‘sexual preference,’ and similar phrases that include homosexuality.” that promised to turn back the clock and managed to convince many Oregonians that by fighting gay rights they could take a stand against the “elites” who were eroding their small-town values, and restore the “natural” dichotomy of the sexes. Though few area residents had ever met an openly gay person, the issue had surprising resonance. Conservative residents had become convinced that affluent sexual “strangers” were fighting for “special rights” and threatening the well-being of their families. Families stopped their kids from playing with those whose parents were on the opposite side of the issue. Fistfights broke out at the high school. It was a clear example of what sociologists describe as a “moral panic,” albeit one that was highly organized.

Practically overnight, the question of whether gays and lesbians should be recognized by the law, and given legal protections, became a central debate around which small communities defined themselves. Yet the campaign did little to address the real material insecurities people faced. When I questioned them, supporters of the antigay measures admitted as much: they weren’t certain that outlawing gay rights would address their problems, but they were willing to see whether it could. The campaign offered a space where people could openly voice prejudices against sexual minorities, people of color, and elites. By asserting their perceived superiority over these groups, they could feel powerful, at least for a moment.

On the other side, “human dignity” groups cropped up throughout the state, dedicated to the principle that targeting the “other” would not alleviate people’s economic distress. They reached back into the tradition of progressive populism, which had been a formidable influence in late-nineteenth-century United States. They brought together liberal Christians, loggers, people of color, laborers, office workers, and farm workers, fostering relationships among people who hardly knew one another, though they often lived in the same small communities, who wished to take a stand against the politics of division. They trained people in the techniques of democratic process and small-group consensus, and changed the public conversation—at least for a while. Though the ballot measures passed in rural Oregon, they failed statewide, and were ultimately declared unconstitutional by the Oregon Supreme Court.

Following those two years of ethnographic research, I published The Stranger Next Door,2 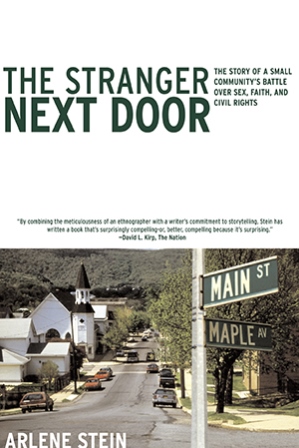 Boston: Beacon Press, 2002More Info → a book documenting my research in rural Oregon. It would not have been written without funding from the Ford Foundation and the proactive vision of the SSRC. Over a span of 10 years, the SRFP, by providing funding for emerging scholars, played an enormous role in the advancing social scientific work on sexuality and gender. It did so, in part, by legitimizing what was then a marginalized area of study.

The continued importance of sexuality and gender studies

When I was in graduate school in the 1980s and early 1990s, an undergraduate course called Sexual Diversity and Social Change was occasionally on offer in the sociology department, but its very existence was routinely disparaged. If we teach such courses, we should also offer courses about “left-handed Eskimos,” one member of the faculty famously quipped.

“Thanks to the recognition and institutional framework offered by the program, many of us who had been laboring in relative isolation developed a deeper sense of the importance of our work.”

The SRFP brought young scholars together for periodic conferences and working groups, connected us to one another, and created an esprit de corps which can still be felt across the nation, and internationally. Thanks to the recognition and institutional framework offered by the program, many of us who had been laboring in relative isolation developed a deeper sense of the importance of our work. Unusual for a scholarly program, the SRFP also encouraged us to make our research publicly accessible, pushing me to publish op-eds about my research and to participate on radio call-in shows.3See, for example, “Trouble in Timbertown,” Oregon Quarterly, fall 2001; “When Bigots Become Freaks: Should We Celebrate?” Images (Gay and Lesbian Alliance Against Defamation), November 2000. It fueled my ongoing interest in what is now termed “public sociology,” a movement that calls upon social scientists to play a larger role in public debates and exert a more profound impact on policymaking by becoming translators of their work.

Thanks in part to the SRFP, the field of sexuality studies has evolved and grown, become better established, and also more decentralized. The comment about “left-handed Eskimos” would probably no longer be uttered in a major graduate department, but that doesn’t mean that the field is fully institutionalized. It’s not. We could certainly use a program like SRFP today. In the 20-plus years since the program was initiated, new frontiers of sexuality and gender are reflected in emerging social movements across the globe, focusing upon questions of sexual citizenship, reproductive rights, and access to health care, among other areas.

Since I first conducted research in the Pacific Northwest, although same-sex intimacy, at least of the domesticated variety, is thoroughly out of the closet and legally sanctioned in much of the global North, right-wing populist movements of the sort I studied have become more influential, targeting cosmopolitan elites and the most vulnerable—especially migrants. Growing numbers of people who identify as trans or gender-variant are mobilizing, becoming vocal and visible—and therefore increasingly subject to the kinds of opprobrium once reserved for gays and lesbians. The kinds of resentments I heard small-town Americans express decades ago have morphed into something darker, more nihilistic, and more globalized. Now more than ever, we need to understand their impact.

1
For example, the 1992 Oregon Ballot Measure 9 decreed, among other things, “This state shall not recognize any categorical provision such as ‘sexual orientation,’ ‘sexual preference,’ and similar phrases that include homosexuality.”
2

Arlene Stein is a sociologist of gender, sexuality, culture, and politics at Rutgers University, where she directs the Institute for Research on Women. Her latest book is Unbound: Transgender Men and the Transformation of Identity (Pantheon, 2018). She is also the author of The Stranger Next Door (Beacon Press, 2002), an ethnography of a Christian conservative campaign against lesbian/gay rights, which explores clashing understandings of religion and sexuality in American culture; it received the Ruth Benedict Book Award. Going Public: A Guide for Social Scientists (coauthored with Jessie Daniels; The University of Chicago Press), is a guidebook for publicly engaged... Read more

Next article Boys Still Being Boys: Sexual Victimization Research and the Persistence of Gendered Accounts