Coinciding with Asian Pacific American Heritage Month, Jennifer Lee and Monika Yadav chronicle the rise of attacks, harassment and bias toward Asian Americans as the Covid-19 pandemic has unfolded as part of our “Covid-19 and the Social Sciences” series. Abetted in part by discourse from the Trump administration, the authors also discuss the past history of these prejudices in prior emergencies. They conclude with an analysis of political differences within the Asian American community and how these might be affected, and possibly bridged, in response to the scapegoating of the group as a whole.

As fears and insecurities about the coronavirus mount among Americans, so too have attacks on Asian Americans. They have been stabbed, beaten, bullied, spit on, pushed, harassed, and vilified based on the false assumption that they are to blame for the spread of Covid-19.

Faulting China for the origin and spread of the coronavirus, the current US president flagrantly dubbed it as the “Chinese virus,” and then turned a blind eye to the rise in coronavirus-related hate incidences against Asian Americans. In one fell swoop, the coronavirus—and Trump’s blithe description of it—reanimated a century-old racist trope that Asians are vectors of filth and disease, and exposed the precariousness of their status.

In the absence of government intervention, Asian American and Pacific Islander civil rights groups created a website where victims can report such hate incidences. Within the first 24 hours of the website’s launch in mid-March, more than 40 incidents were reported. A month later, the number exceeded 1,500. Most incidents are verbal harassment, but some are far more serious.

In Texas, for example, a man stabbed a Burmese American family—a father and two young children (ages 2 and 6)—because he thought they were Chinese and were infecting people with the coronavirus. In Brooklyn, a man poured acid on an Asian woman while she was taking out the trash in her home, severely burning her head, neck, and back. And in midtown Manhattan, a Korean woman was grabbed by the hair and punched in the face. Even Asian American nurses, doctors, and pharmacists on the front lines of the pandemic find themselves fighting racial discrimination as the virus spreads.

The racist and xenophobic reactions directed at Asian Americans are not unlike those experienced by Sikh, Hindu, and Muslim Americans after September 11 when they were falsely accused of terrorism against the United States. However, there is a crucial difference between 2001 and 2020. Then, President George W. Bush immediately condemned attacks against Hindu, Sikh, and Muslim Americans as well as other South Asian Americans. The current president, in contrast, sustained his attacks on China, fueling xenophobic animosity against Asian Americans, and effectively putting a target on them.

Trump’s blatant disregard for his words’ impact on the Asian American community was on full display when he doubled down on using the label “Chinese virus” before finally conceding under political pressure to let it go. However, by the time he relented, the damage had been done. Much like his anti-immigrant rhetoric leading to negative sentiments against immigrants and Latines, Trump’s coronavirus rhetoric and its coverage in the media amplified the vilification of Asian Americans.

According to a new Ipsos survey conducted by the Center for Public Integrity, nearly one-third (32 percent) of Americans have witnessed someone blaming Asians for the coronavirus, and about twice as many Asian Americans (60 percent) have reported the same. Harassment toward Asian Americans has skyrocketed in 2020. By way of comparison, only four years ago, relatively few Asian Americans reported incidences of harassment. In the 2016 National Asian American Survey (NAAS), about 9 percent of Asian Americans responded to having been threatened or harassed, and 14 percent reported having been insulted or called names. Chinese Americans, the survey found, were in fact among the least likely Asian groups to experience these forms of assault. But things changed quickly in the wake of Covid-19. 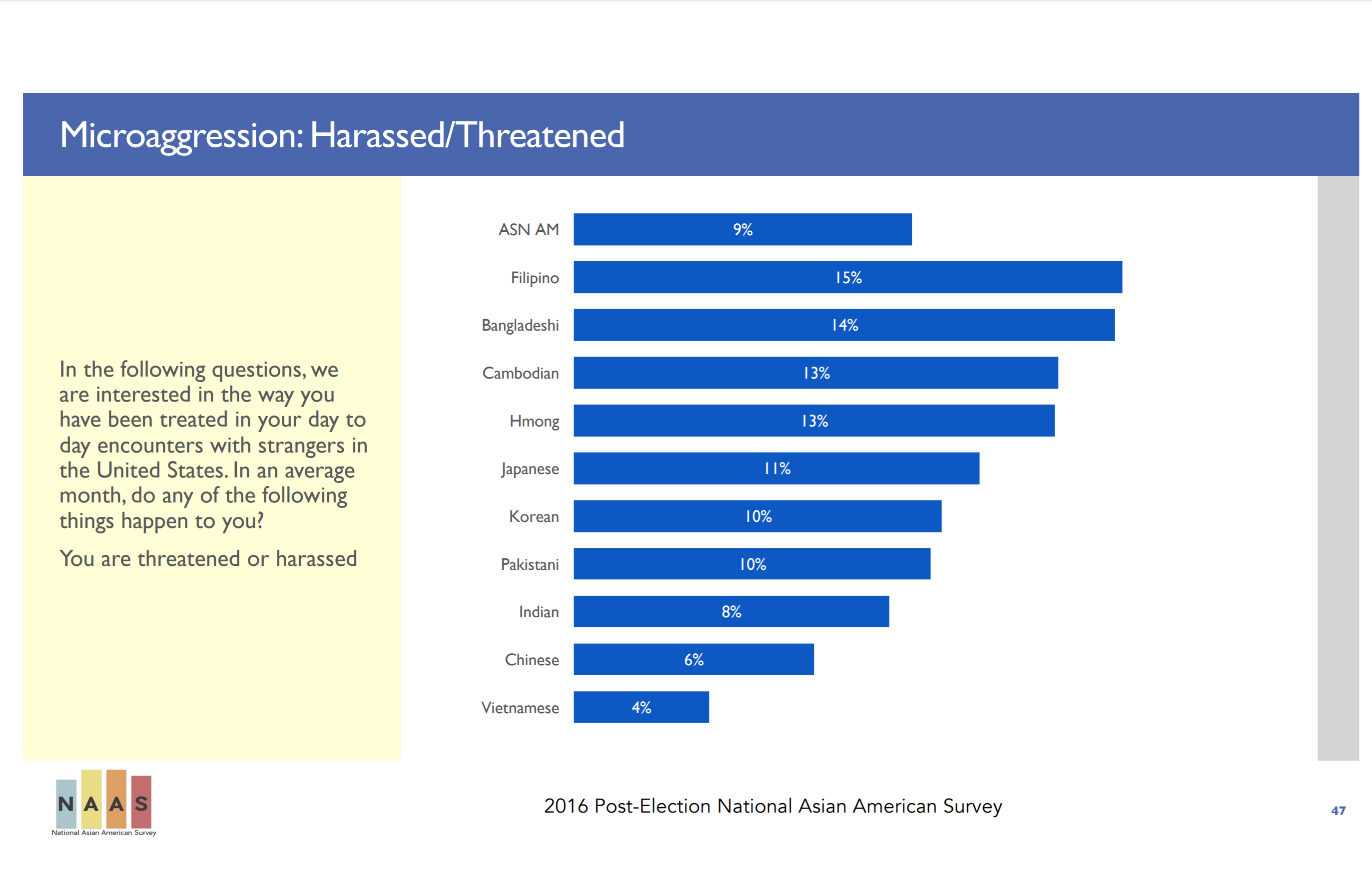 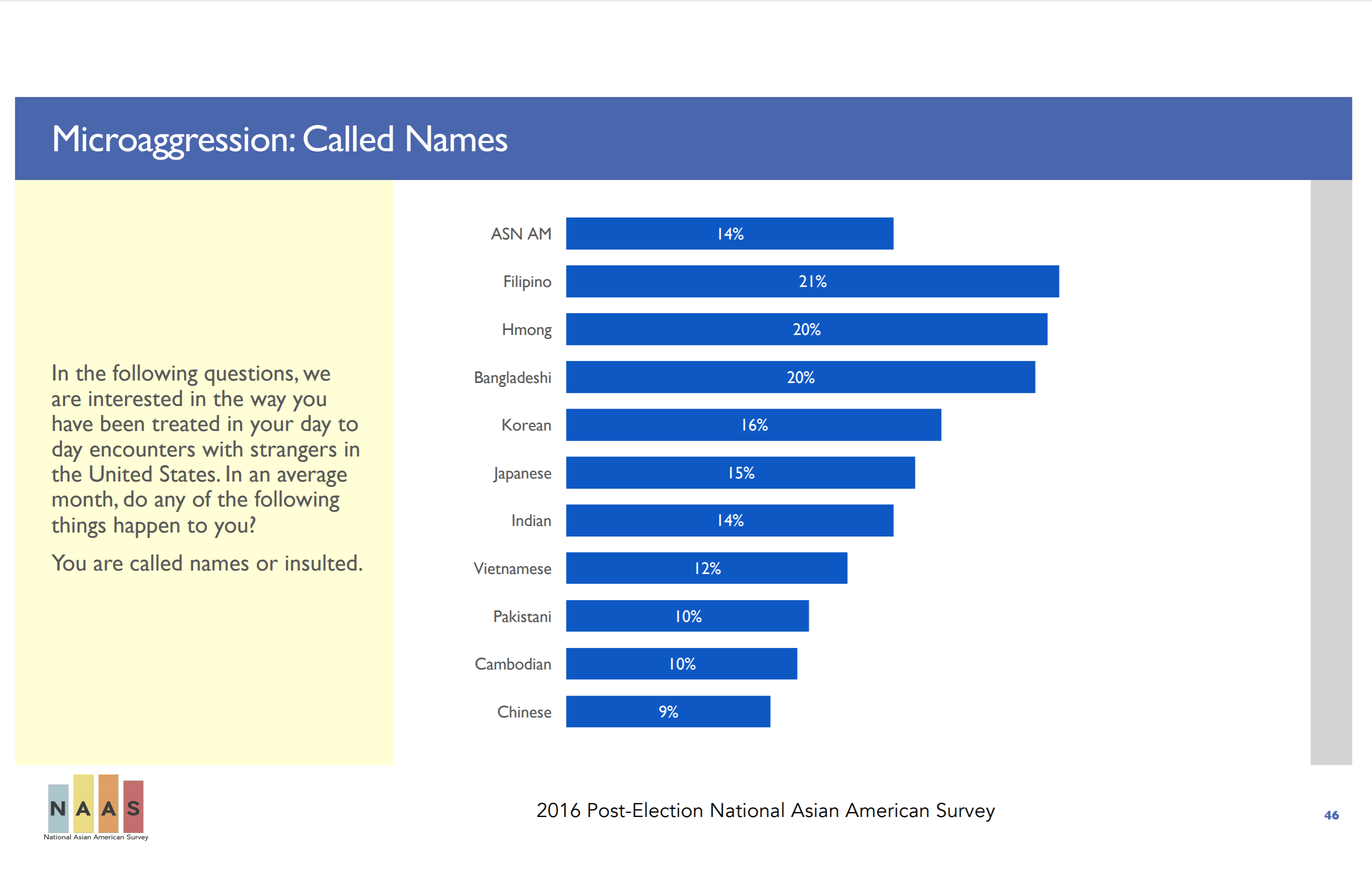 The cases of discrimination and harassment against Asian Americans do not seem to be abating in near future. Anti-Asian hate—particularly directed at Chinese and Chinese Americans—will continue and even magnify if Trump follows through on his threat to punish China and demand financial compensation for its handling of the coronavirus pandemic.

A moment of reckoning for Asian Americans

This moment should be a reckoning for Asian Americans that—regardless of political persuasion—native-born status, US citizenship, elite degrees, and professional jobs are no shields against hate, xenophobia, racism, and scapegoating. Actor John Cho articulated this harsh reality as he described the feeling of being embraced as American in one moment, and then derided as a foreigner who “brought” the virus to the United States in the next, “When I became an actor (maybe as a result of all that TV)… doors were open, strangers were kinder. In some ways, I began to lead a life devoid of race. But I’ve learned that a moment always comes along to remind you that your race defines you above all else.”

Charlotte Wang, an Asian American graduate student in the Department of Sociology at Columbia added, “This moment is a reminder that our privileged position is ultimately not about how hard we (or our ancestors or parents) worked, or how well we learned American social norms, but about how those in power decide who is a threat, who can be targeted.”

While a new precarious reality for Asian Americans is underway, former presidential candidate Andrew Yang ignored the present situation and advised Asian Americans to respond to the pandemic by proving their American patriotism. We argue that Asian Americans have nothing to prove.

As sociologists, we recognize that this most recent wave of anti-Asian sentiment in the United States has deep-seated historical roots that include the relocation and incarceration of more than 120,000 Americans of Japanese descent during World War II. That Americans of German descent were not targeted to anywhere near the same degree laid bare the country’s nativist fault line that divided Americans of European descent from all others. Respectability politics did not shield Japanese Americans from internment during World War II, just as it will not shield Asian Americans from anti-Asian hate today.

This will also be a hard lesson for a quarter of Asian Americans who voted for Trump in 2016. Particularly for Chinese Americans—the largest Asian group which accounts for one-fifth of the US Asian population—among whom, a significantly higher percentage (about 35 percent) cast their ballots for Trump. 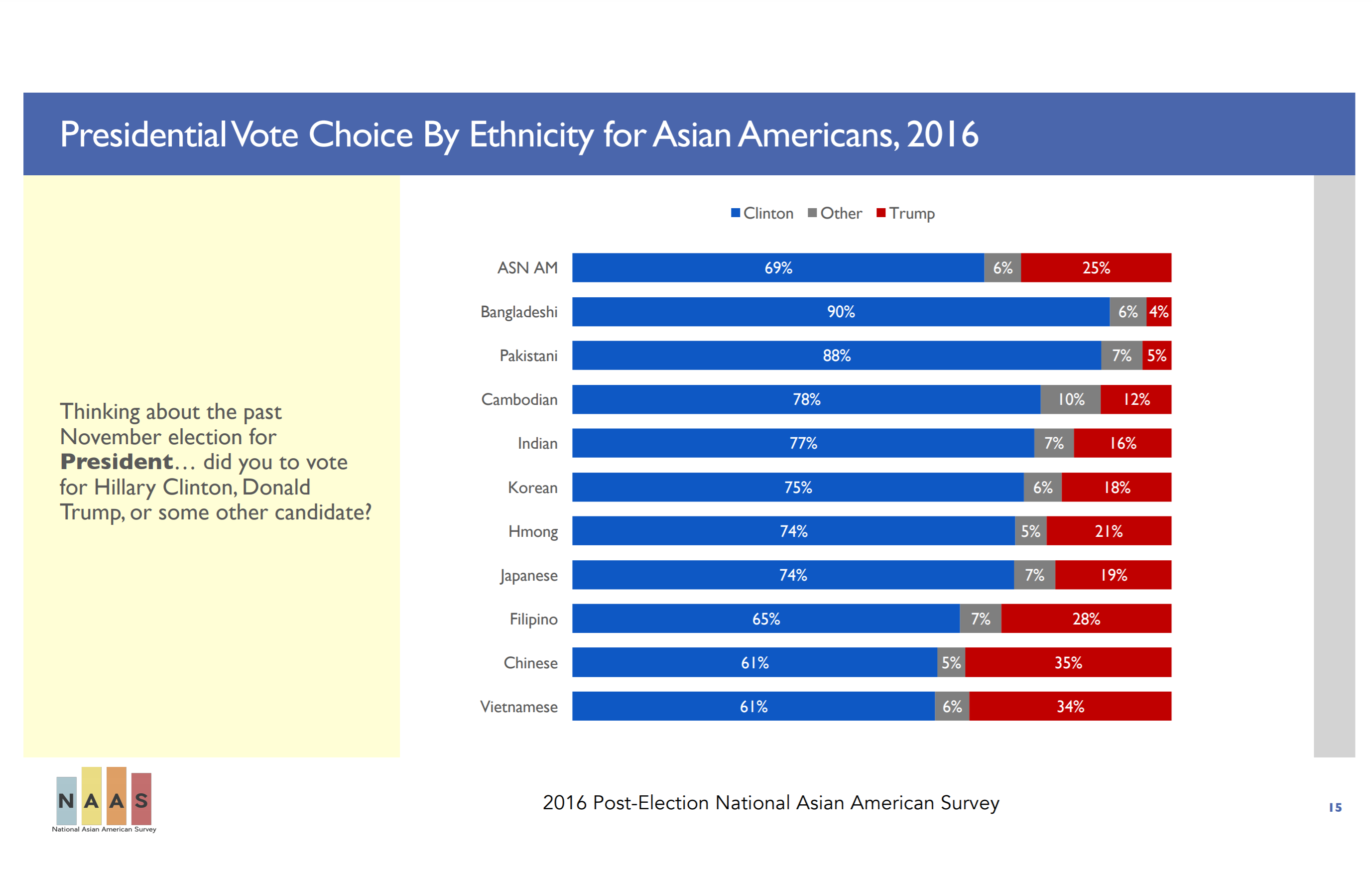 Many of these Trump supporters represent a new brand of highly educated, hyper-selected Asian immigrants who are both more likely to boast a college degree than their nonmigrant counterparts, and also more likely to be college-educated compared to US-born Whites and Blacks. Armed with human and financial capital, they have entered the US political sphere, and exhibit attitudes that diverge drastically from the Asian American college student activists of the 1960s who fought for civil rights by empowering Asian Americans to create a more just United States for all. These Asian American student groups worked closely to build pan-ethnic solidarity among Asian groups as well as multiracial coalitions with African Americans and Latines. It was the groundwork laid by these student groups in San Francisco and later in Berkeley and New York in the late 1960s that led to the establishment of ethnic studies programs in universities. Organizing with other groups to demand open admissions and the hiring and inclusion of more non-White faculty and students on college campuses, the Asian American student groups led an era of activism that focused on equity and social and political justice for everyone. The new group of politically active Asian Americans, by contrast, is more narrowly focused and closed in itself.

This cadre of politically conservative Asian immigrants believe in the American dream and immigrated to the United States because they subscribe to the creed of America’s open opportunity structure: those who get ahead do so on the bases of talent, hard work, and grit. They also believe that one’s racial status should be neither a penalty nor a reward, and are committed to protecting opportunities for their US-born children. This group of Asian immigrants has aligned with politically conservative entrepreneurs like Edward Blum in his battle to dismantle race-conscious policies like affirmative action.

From fighting to undo affirmative action at Harvard to protesting New York City’s attempt to reform specialized high school tests, this faction of politically conservative Asian immigrants has demonstrated no intentions of following their liberal-leaning predecessors. Yet, the current pandemic will serve as a reality check for this section of Asian Americans as they gradually learn that the ally with whom they sided will not support them when they are the targets of attack. The president’s attribution of the coronavirus to China, and the virulent attacks against Asian Americans show how easily they can fall on “the wrong side” of America’s nativist fault line. Racial mobility is no guard against anti-Asian prejudice.

Times of crises also present opportunities. May is Asian Pacific American Heritage Month (APAHM), which calls for all Asian Americans to revisit their history and champion solidarity, not only with other Asian ethnic groups but also with other minoritized groups. Realizing the precariousness of their racial status should make Asian Americans acknowledge the precariousness of the status of all minoritized groups, each of which could be a victim of the United States’ racist and xenophobic disposition at any time.

Thus, it is only when the minority racial groups and communities including Asian Americans come together to build broader coalitions that they can stand to battle systemic racism. Tiffany Huang, another Asian American graduate student in the Department of Sociology at Columbia adds, “A greater collective understanding of Asian Americans’ history and place in the United States would go a long way toward building solidarity to combat not only anti-Asian racism, but racism against other groups that is stoked in part by stereotypes about Asian Americans.”

The coronavirus pandemic can be a defining political moment for Asian Americans to recognize that the lines that divide all minority groups pale in comparison to the threats and opportunities that can unite them.

Monika Yadav is a PhD student and Paul F. Lazarsfeld Fellow in the Department of Sociology at Columbia University. Her primary fields of inquiry are political sociology, labor, sociology of law, inequality, and social movements. Her current research focuses on the spillover effects of labor unions on nonunion workers in the United States. Yadav holds a master’s degree in sociology and an undergraduate degree in computer engineering. Follow her on Twitter @fickleRover.

Previous article Between Religious Freedom and the Public Good: Reactions to Religious Restrictions to Prevent the Spread of Covid-19 in Nigeria

Next article Political Economy and Democratic Capacity to Respond to Pandemics

Beyond Simply “Lessons Learned”: Pandemic through the Disaster Lens

Covid-19 Blind Spots in Brazil, the United Kingdom, and the United States

Qatar, the Coronavirus, and Cordons Sanitaires: Migrant Workers and the Use of Public Health to Define the Nation