It is commonly believed that congressional leaders will always obey the “first commandment” of party leadership: Thou shalt not aid bills that will split thy party. Nevertheless, in 2017 House Speaker Paul Ryan and Senate Majority Leader Mitch McConnell allowed voting on a bid to repeal and replace the Affordable Care Act (ACA), putting on display their party’s ideological divisions. In this Democracy Papers essay, Ruth Bloch Rubin draws on the personal papers of midcentury House Speaker Sam Rayburn (D-TX) to understand when and why congressional leaders choose to act as agents of discord. She investigates how Rayburn used intraparty tensions to push for his agenda. Bloch Rubin argues that Rayburn’s tactics provide a new angle for understanding contemporary congressional action like the ACA bill.

Leadership lapses or something more?

Following months of negotiations between the Trump White House and congressional Republicans, and after a series of tense votes in both chambers, the GOP’s effort to repeal and replace the Affordable Care Act (ACA) died on the Senate floor in August 2017. Despite having campaigned for years against Barack Obama’s signature domestic initiative, Republican lawmakers were deeply divided when presented with the opportunity to propose a substitute. Where moderate Republicans sought to preserve core planks of the healthcare program and amend others, their hardline colleagues demanded nothing less than full repeal. Nevertheless, House Speaker Paul Ryan (R-WI) and Senate Majority Leader Mitch McConnell (R-KY) scheduled—and then rescheduled—votes that laid bare their party’s ideological divisions and further exacerbated tensions between Republican moderates and hardliners.

“Typically, we assume that leaders will prioritize policies and adopt rules that promote ideological coherence within their party.”

Ryan and McConnell’s desperate, but ultimately unsuccessful, bid to repeal and replace the ACA calls into question how we tend to think about the goals of congressional leaders. Typically, we assume that leaders will prioritize policies and adopt rules that promote ideological coherence within their party. Here, Republican leaders structured the legislative agenda and floor deliberations in ways that exposed factional disagreement within their party. What were they trying to accomplish? Was this simply a miscalculation? What are leaders’ incentives and ability to repair—or exacerbate—ideological rifts within their rank and file, and how have they changed over time?

To understand how leaders think about—and grapple with—intraparty conflict, we must reevaluate what we know about how they seek to manage their coalitions. Drawing on the personal papers of Rep. Sam Rayburn (D-TX), who served as House Speaker for nearly three decades in the midcentury (1940–1946; 1949–1953; and 1955–1961), I explore when and why congressional leaders will seek to intensify or exploit dissent within their respective parties. That is, when will leaders act as agents of discord? And, what are the consequences—for Congress and the rest of us—when they do?

Congressional leaders as agents of discord

Political scientists traditionally view majority and minority party leaders as agents of party cohesion—working to disguise members’ divergent preferences by tabling or otherwise undermining proposals that threaten to divide the party. Beholden to the party members who elect them, congressional leaders seek to advance the collective interests of their rank and file. To this end, they will “always obey the ‘first commandment of party leadership’—Thou shalt not aid bills that will split thy party—and sometimes obey the second commandment—Thou shalt aid bills that most in thy party like.”1Gary Cox and Mathew McCubbins, Setting the Agenda: Responsible Party Government in the U.S. House of Representatives (New York: Cambridge University Press, 2005), 24. Leaders’ relative capacity to advance their party’s collective interests will depend on the extent to which members agree on what those interests are. “When there is a high degree of homogeneity of preferences…leaders vigorously use the tools they have been granted. As preference homogeneity declines…leaders tend to respond with caretaker or housekeeping strategies.”2David Rohde and Kenneth Shepsle, “Leaders and Followers in the House of Representatives: Reflections on Woodrow Wilson’s Congressional Government,” Congress & the Presidency 14, no. 2 (1987): 122–123.

While it may be the case that congressional leaders often seek to promote the policies favored by a majority of their copartisans, thereby preserving party cohesion, political scientists have been slower to acknowledge leaders’ capacity to strategically exacerbate and exploit dissent within their respective coalitions. Indeed, while students of Congress tend to assume leaders benefit from party homogeneity and strive for unity, I begin with the observation that leaders sometimes seek to stoke or amplify intraparty conflict. With this as a starting point, we can begin to explore empirically when and why leaders will undertake to divide their party—or at least to promote, sometimes subtly, the efforts of those who do.

Digging into some history

“By working behind the scenes, Rayburn avoided open conflict with fellow southerners while also slowly curtailing their power.”

Diving into the archives of midcentury congressional leaders in both the House and Senate offers some initial answers. Indeed, these records reveal that while party leaders often conceal their efforts to intervene in intraparty fights, they regularly take steps to advantage one faction over another. Rayburn is emblematic of this strategy. Inundated by requests for more favorable committee assignments from both liberal and conservative members of his party, Rayburn would inform each lawmaker—regardless of their seniority or ideology—that he was bound by the decision of the Democratic Steering Committee. In fact, correspondence between Rayburn and Steering Committee members reveals that when allocating coveted committee seats, the Steering Committee made assignments at Rayburn’s direction. Beginning in the 1950s, Rayburn used the Steering Committee to limit the influence of southern Democrats, denying their requests for new seats or transfers. Instead, he directed his colleagues to reward more loyal, liberal members when allocating desirable posts. As Rayburn explained to his partisan confidantes, he believed the party’s future lay with reformers rather than those who sought to preserve Jim Crow. By working behind the scenes, Rayburn avoided open conflict with fellow southerners while also slowly curtailing their power.

The archival record also suggests that while congressional leaders may complain publicly about the presence of organized dissident blocs, they can privately use them to influence the party’s development in ways they perceive beneficial to its long-term success. Here, too, Rayburn is instructive, for he understood the value of the liberal Democratic Study Group as a counterweight to southern Democratic influence. Again, rather than confront southern lawmakers directly—and risk his own regional bona fides—Rayburn secretly channeled aid to liberal pro-civil rights forces. Indeed, as Randy Strahan has argued, although leaders like Rayburn certainly perceived a weak majoritarian constraint on their power, they nevertheless enjoyed significant autonomy to pursue the policy and procedural objectives they believed would ultimately advantage their respective parties.3 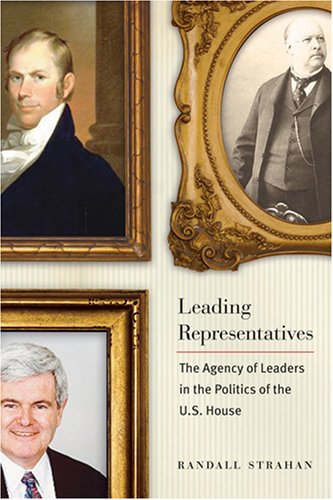 Baltimore, MD: Johns Hopkins University Press, 2007More Info → As the archival record makes clear, this is partly because congressional leaders are at an informational advantage over their rank and file. True, members will surely know their own preferences better than party leaders. But, by dint of experience, congressional leaders are more likely to possess superior knowledge of chamber procedure. They also benefit from both formal means of collecting information (e.g., party whips) and informal communication networks (e.g., the party rumor mill)—and can often leverage what they already know to extract even more information. Consequently, we might conclude that intraparty conflict is as much boon as burden for congressional leaders, for it provides a multitude of opportunities to shape their parties as they see fit.

In our present era of starkly polarized parties, both scholars and pundits are often preoccupied by the widening gap between congressional Republicans and Democrats. Regularly lamenting the decline of bipartisan comity, they argue that contemporary parties are far more ideologically homogeneous than previous incarnations. But what is often missed in all of this hand-wringing is the fact that even polarized parties are prone to internal discord. Indeed, as Everett Carll Ladd reminds us, intraparty discord has always been present in both parties: “[Each has] contained disparate groups…[spanning] the entire spectrum of substantial ideological argument.”4Everett Carll Ladd, American Political Parties: Social Change and Political Response (New York: W.W. Norton & Co., 1970), 30–31. Across historical eras, congressional leaders have regularly faced ideological divisions within their parties. Sometimes they seek to suppress those cleavages and at other times they readily exploit them for their own purposes. As scholars of Congress, our mission is to understand—whether in the past or present—when, why, and how party leaders exploit these divisions.

“Against the backdrop of Rayburn’s behind-the-scenes maneuvering, it is clear midcentury leaders exercised a great deal of power, albeit in a more subterranean fashion.”

From a historical perspective, these empirical findings call into question our standard periodization of party power in Congress. Conventional accounts hold that in the decades preceding southern realignment, congressional Democratic leaders were weak—caught between an increasingly vocal liberal flank and an intransigent group of southern conservatives. Power in the so-called “textbook Congress” was concentrated instead in the hands of southern committee chairs, who could exploit leaders’ relative weakness to establish smaller fiefdoms and limit progressive policymaking. Against the backdrop of Rayburn’s behind-the-scenes maneuvering, it is clear midcentury leaders exercised a great deal of power, albeit in a more subterranean fashion. The intraparty divisions and observed levels of ideological heterogeneity that scholars have previously identified as the source of party leaders’ weakness were instead a consequence, at least in part, of Rayburn’s approach to reshaping the Democratic Party. Intraparty discord, then, is not simply a fact that party leaders must contend with. Rather, it is something they themselves have agency—and, at times, the incentive—to foment.

Thinking about whether congressional leaders’ have a stake in inflaming intraparty discord might occasion a reevaluation of our current politics. Looking at the failed attempt to repeal the ACA, the conventional narrative is that Republican leaders were caught in an impossible bind—unable to resolve the tensions between conservatives who would accept nothing less than full repeal and moderates who believed it important to preserve key pieces of the Democrats’ healthcare initiative. Taking seriously the possibility that leaders sometimes act as agents of discord reframes the inquiry by putting the spotlight back on McConnell and Ryan. Did they see political advantage in showing their colleagues just how divided the party was, and conclude that the only way to move forward was through a public humiliation? Did they come to believe it necessary for the House Freedom Caucus, the staunchest opponents of ACA, to suffer a public defeat by moderate Republicans in the Senate? It is too early to know for sure. But the Rayburn example suggests, at minimum, that we should not be so quick to dismiss the possibility that Republican leaders deliberately staged a stunningly unsuccessful series of votes to make a point to their more headstrong rank and file.

Ruth Bloch Rubin is an assistant professor in the Department of Political Science at the University of Chicago. Her research explores how intraparty divisions drive patterns of lawmaking, institutional development, and party leadership in Congress. She received her PhD from the University of California, Berkeley’s Department of Political Science in 2014 and from 2014–2016 was a Robert Wood Johnson Scholar in Health Policy Research at Harvard University. Bloch Rubin received a Social Science Research Council Negotiating Agreement in Congress research grant in 2017–2018 for a project titled “How Factional Discord Shapes Patterns of Party Leadership and Policymaking in Congress”

Previous article The Role of the Mass Media in Presidential Campaigns: The Lessons of the 1976 Election

Next article The National Reputations of Moderate Senators

The United States Has a Democracy Problem: What Democratic Erosion Scholarship Tells Us about January 6