The 2020 Photo Competition was open to IDRF fellows in the 2019 cohort who wanted to share their favorite and most captivating photos—showing the life they have been witnessing and living every day, up to and including our Covid-19 quarantines. This year there were five categories for submission: Single Photo, Self Portrait, Quarantine Photo, Photo Essay, and Video. We are pleased to announce the winners of the 2020 competition. 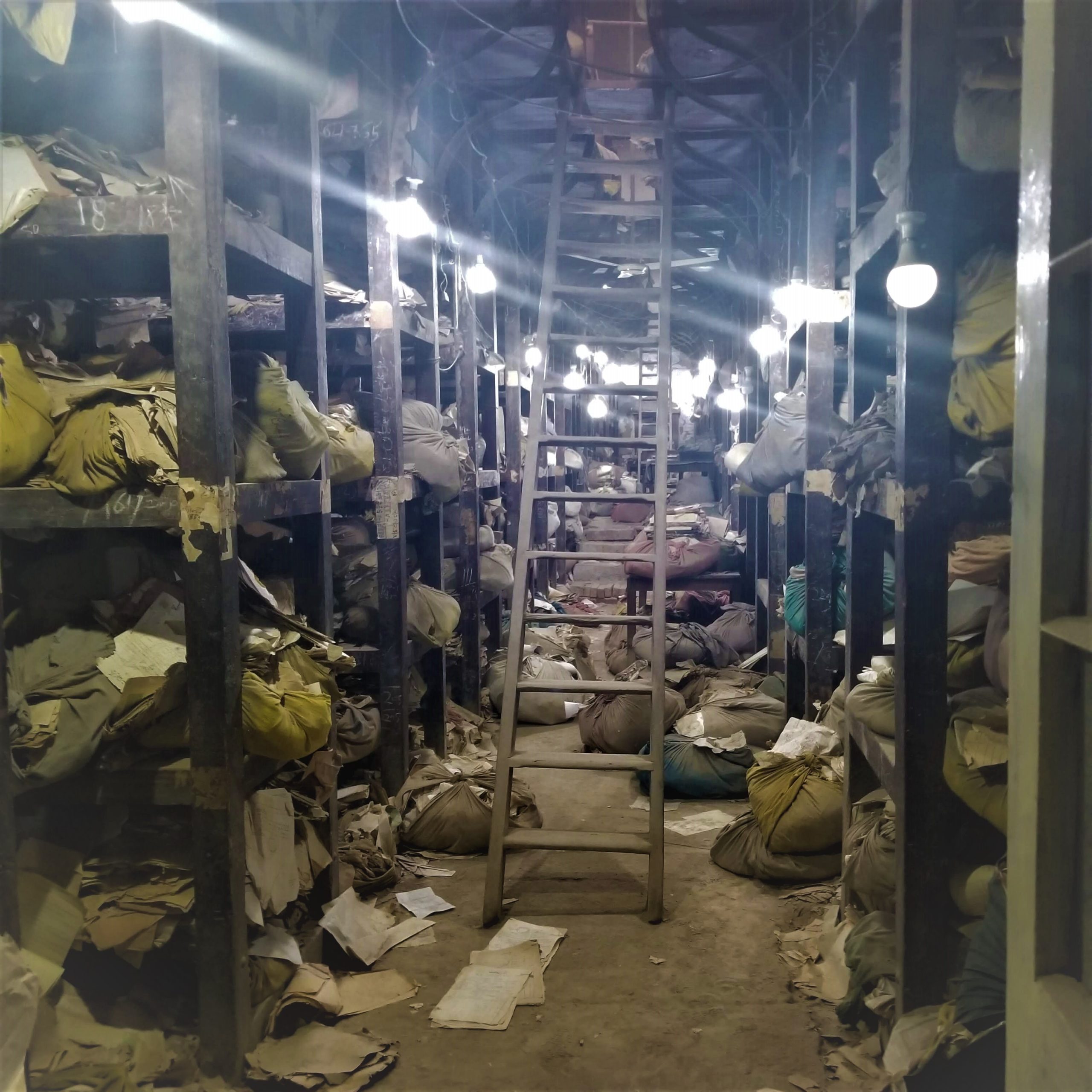 “The Archive”: This is the main entrance of the record room of district Sahiwal, which houses all the land tenure records for the entire district. The district office complex was built in 1865, when this town was known as Montgomery and was an important new British colonial outpost in the recently annexed Punjab. In the record room, which overflows into the story above (accessible via ladder pictured), documents are bundled in cloth and indexed by numbers written in chalk on the iron girders—imported from London by the colonial builders—that make up the shelves. The documents are arranged according to a miniature map of the villages they pertain to, organized by the same colonial system of labeling and numbering these canal-colony villages according to their position along the water distribution systems that were built—number 24, 33, 17, left, right, lower, upper, and so forth. Photo taken in district of Sahiwal, Pakistan. 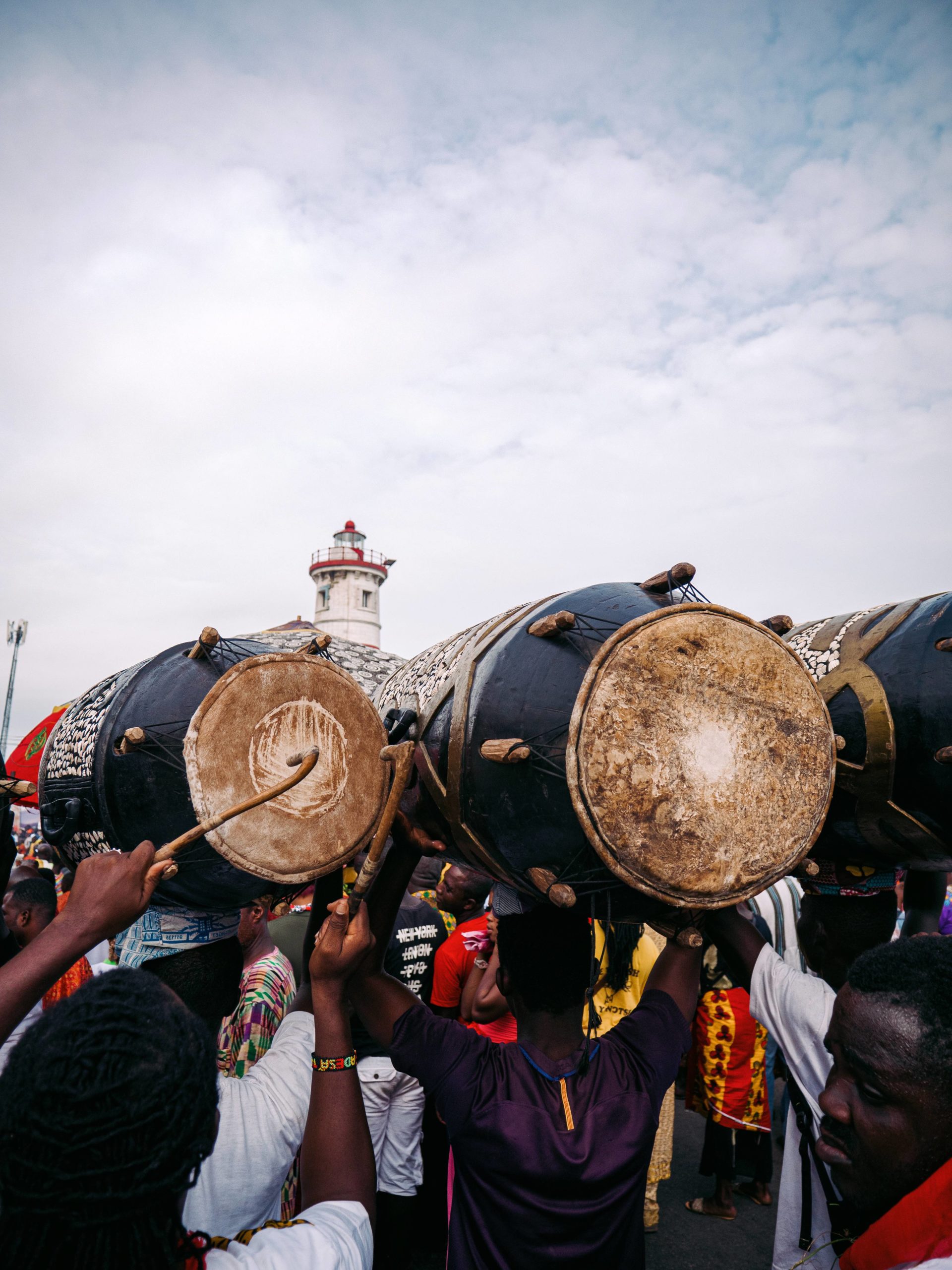 “‘Ga Sɛɛ Gbɛ Dzi Gbɛ,’ All Roads Lead to Accra”: Obonu royal drummers perform music associated with Ga chieftaincy during a festival street procession, part of the entourage of one of the important family clans in Accra. Accompanied by the firing of muskets, revving motorcycles, and singing Asafo military companies, Obonu drums are carried aloft past the iconic Jamestown lighthouse, built overlooking the sea by the British colonial government in the 1930s. Photo taken in Jamestown – Accra, Ghana. 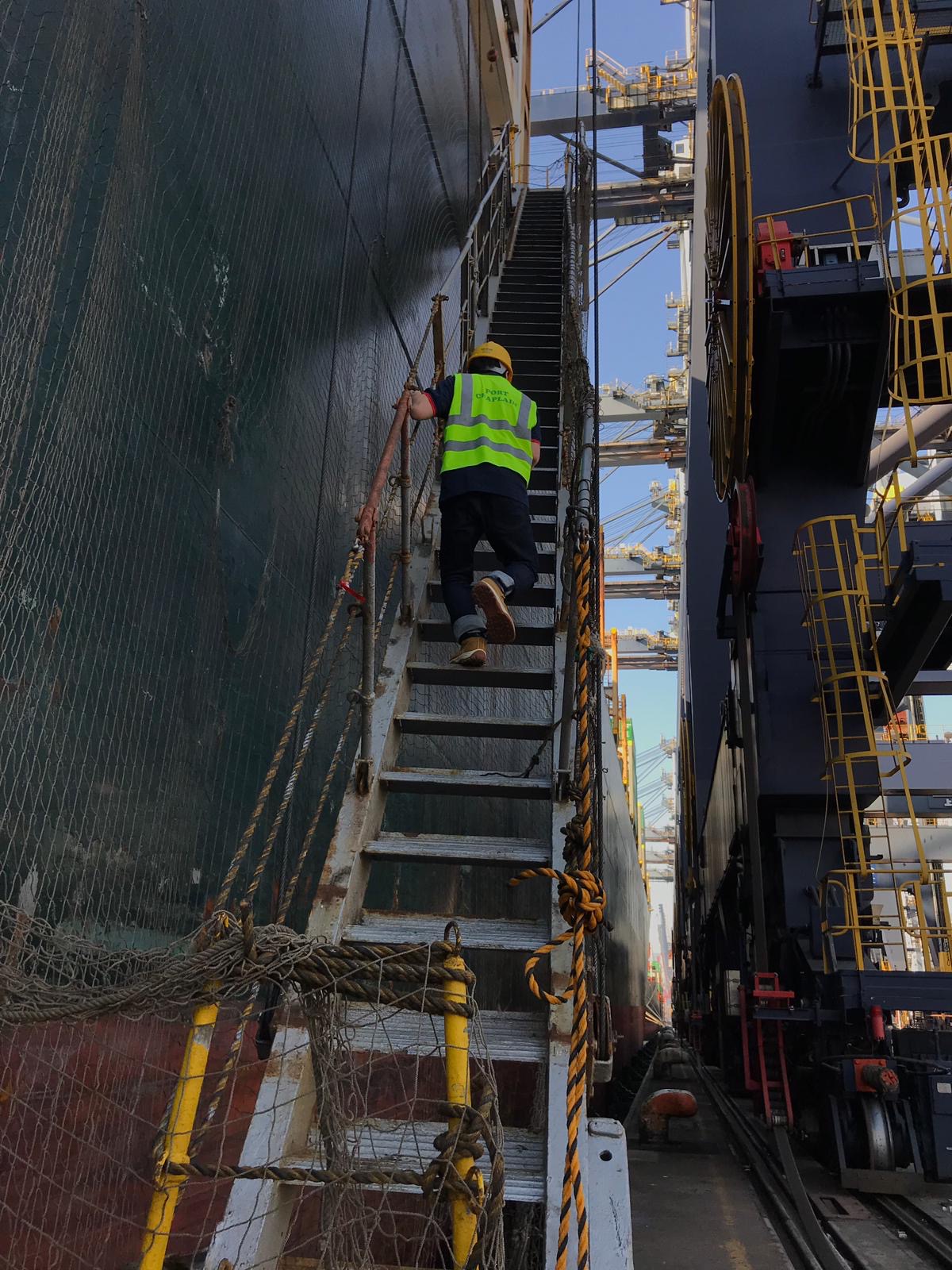 “An Uphill Battle”: Field researcher Liang Wu climbs up the 80-degree gangway of a mega container ship to carry out another ship visit and interview working seafarers. Such a physical hurdle was already among the easiest of the methodological difficulties he had been experiencing. He would soon learn that he was only in the first state of emergency during his dissertation research year—the escalating social unrest and violence in Hong Kong before the outbreak of the global coronavirus pandemic that has destabilized international supply chains, and exacerbated seafarers’ and his own precarity and immobility. Photo taken in Port of Hong Kong. 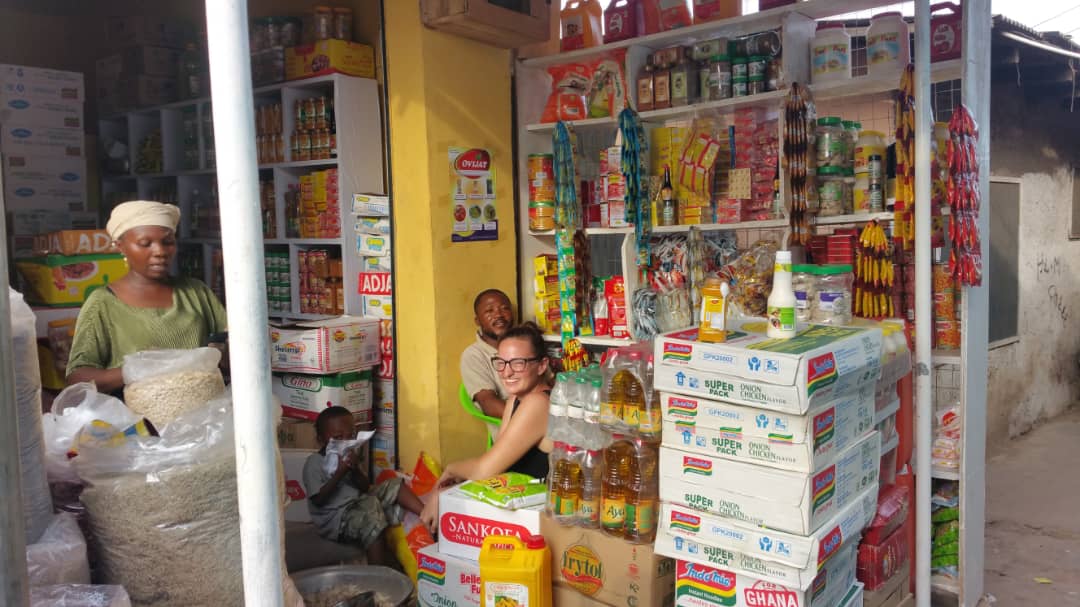 “Cikin Kasuwa (At the Market)”: This photo was taken at a dear friend’s shop in the heart of Nima Market, one of Accra’s largest grocery markets. The folks pictured along with me have been close friends for nearly three years and I wouldn’t have been able to succeed in my research without them. We took this photo on one of my final days in Accra after I had found out I would be forced to leave suddenly due to the Covid-19 outbreak. We were trying to make the best of one of our last days together and decided to take a picture as a memento. Please note that the use of this photo was enthusiastically consented to by those pictured and subscribes to IRB ethical parameters. Photo taken in Nima Market in Accra, Ghana. 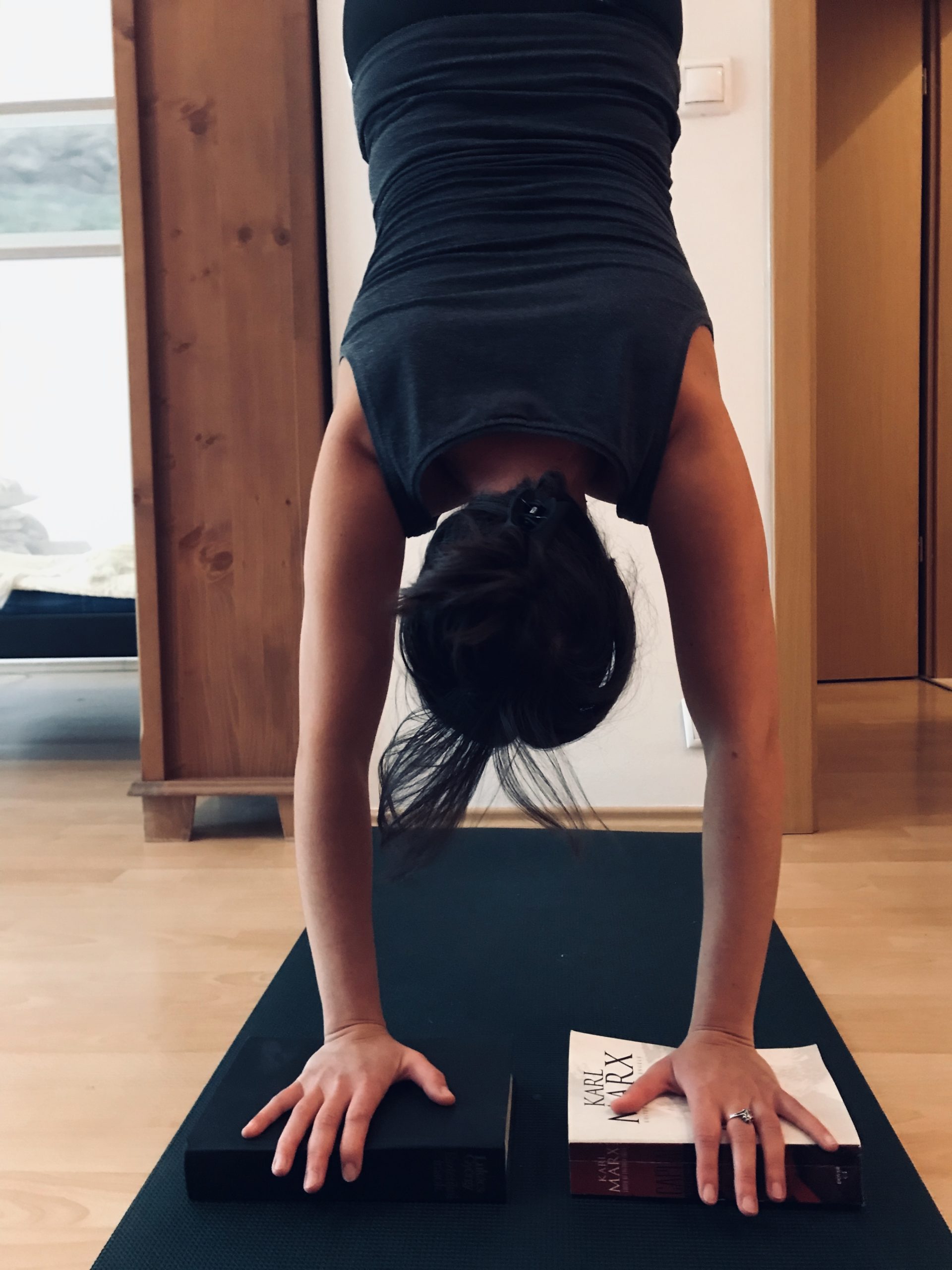 “Yoga à la Marx and Lukács”: Thanks to my privilege to work from home during the quarantine, I have developed a new kind of Yoga practice, which is quite literally based on Marxist and Lukácsian thinking! I never imagined I would be this much grounded on the overtly heavy and thick collections of writings by Karl Marx and György Lukács, but seemingly this is what happens when the world turns upside down during a pandemic, and I am in lockdown alone with my books… Photo taken in Budapest, Hungary. 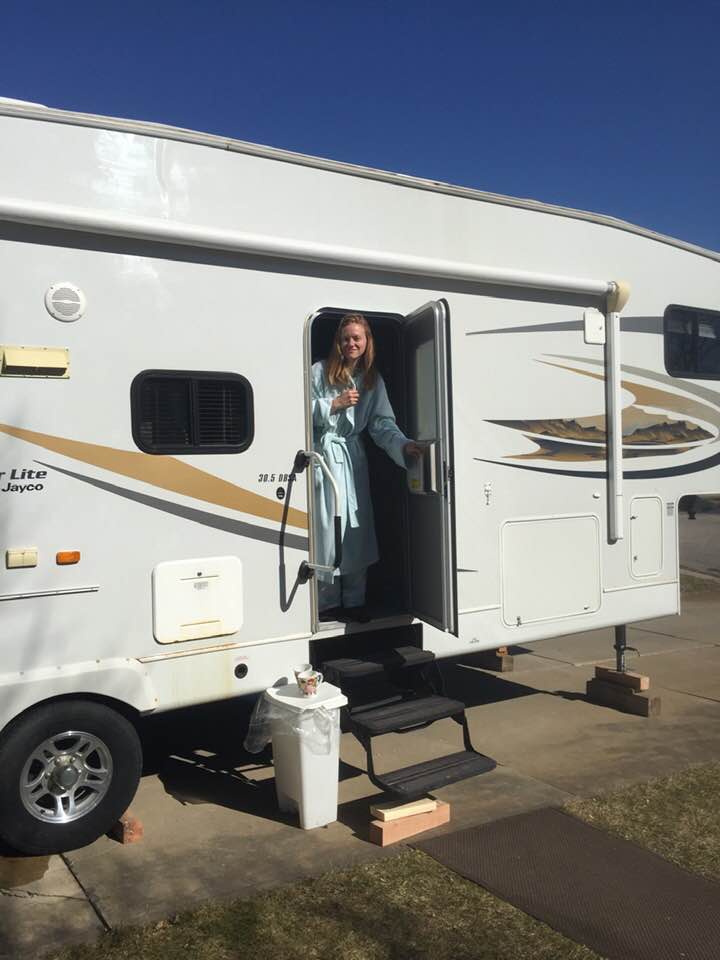 “Camping Out the Quarantine”: When the Italian government announced that it would close its border in mid-March, the State Department had me evacuate the country. In the last-minute rush back to the United States, as all the flights out of Italy were being canceled, the only quarantine I could arrange was a neighbor’s camper, parked in my parent’s driveway. I stayed here for three weeks! Photo taken in Detroit, Michigan.

“Street Vending in Downtown Porto Alegre”: As in most parts of the world, municipal authorities in Porto Alegre, Brazil, enacted social distancing measures. They ordered nonessential businesses to close from March 18 until April 30 before extending the order until May 6, 2020. By early April, however, food carts and fruit vendors, who had deserted the streets in previous weeks, had resumed their activities in the center of the city. That loosening of social distancing rules is due in part to the difficult decision many have to make between going hungry while observing social distancing measures and risking one’s life by going out to earn a living. Most street vending is ordinarily illegal in the center of Porto Alegre. As a move to prevent the phenomenon, city officials had built a “Centro Popular de Compras,” a popular shopping center locally known as “Camelódromo,” and ordered street vendors (camelôs) to move there in 2009. To enforce the decision, there are special police called fiscaliação that hunt street vendors who do not adhere to the rules and seize their products, sometimes violently. During this Covid-19 shutdown, I have been struck by the contrast between the closed businesses and the relative ease with which the informal economy operated weeks before authorities decided to ease social distancing measures. Many of the camelôs are migrants from other parts of Brazil but also from Senegal, Venezuela, and Bolivia. This photo shows what Andradas Street in downtown Porto Alegre looked like on May 2 at around noon, while a shutdown order was still in place. Photo taken in Porto Alegre, Brazil.
“A Senegalese Camelô”: This Senegalese camelô sells watches, sunglasses, and jewelry. He is sitting in front of a closed Renner store in downtown Porto Alegre. Renner is one of the largest fashion retailers in the country. Photo taken in Porto Alegre, Brazil.
“Water for Sale”: This Brazilian street vendor who sells water also uses the closed windows of a retail store as hangers for his products. The fact that he is not wearing a mask and may be considered part of the vulnerable population also struck me. Photo taken in Porto Alegre, Brazil.
“Face Masks”: Handmade face masks are popular products these days. This photo of a street vendor who sells them but is not wearing one properly illustrates how difficult it is to avoid contamination while working as a street vendor. It is hard to communicate with clients while wearing a handmade face mask. Photo taken in Porto Alegre, Brazil.
“Time to Read”: This Bolivian vendor of masks sits reading in the historic center of the city while waiting for clients. Photo taken in Porto Alegre, Brazil.

IDRF Fellows Pick (only 1 winner for this category): Gana Ndiaye

The Baay Faal: A Sufi Group from Senegal: The video shows some of the religious activities of a group of Senegalese Sufi immigrants in Brazil: the Baay Faal. Video filmed in Rio de Janeiro and São Paulo.

Previous article Acting “as if” during Pandemic: Information and Authoritarian Practice in White House
Next article Refugees and Migrants – A Blind Spot in Ghana’s Covid-19 Response?

How Movements Like #MeToo Can Address Marginalization, Isolation, and Alienation Among Activists