The International Dissertation Research Fellowship (IDRF) Photo Competition is offered every year to IDRF recipients. Prizes are awarded for the best single photo, the best self-portrait, and the best photo essay following a vote by IDRF fellows and staff. We are pleased to announce the winners of the 2019 competition: 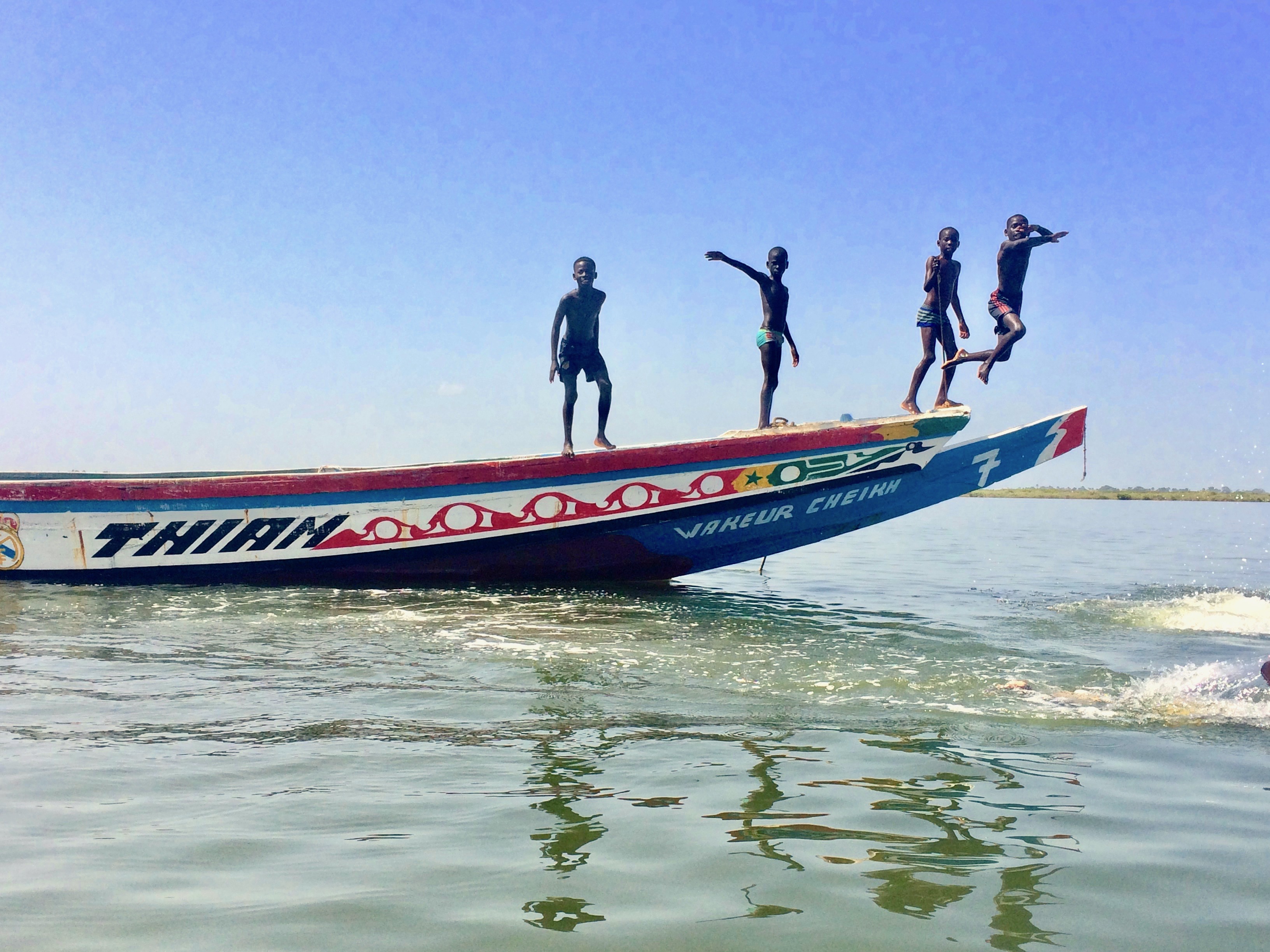 “Home Is Where People Know How to Pronounce Your Name”: This was technically a day off. I was taking a boat tour of the Siné Saloum delta with my uncle, aunt, and cousin. When these kids showed up on a boat with our family name on it (Thiam is a fairly common name in Senegal) we got very excited. Photo taken in Siné Saloum, Senegal. 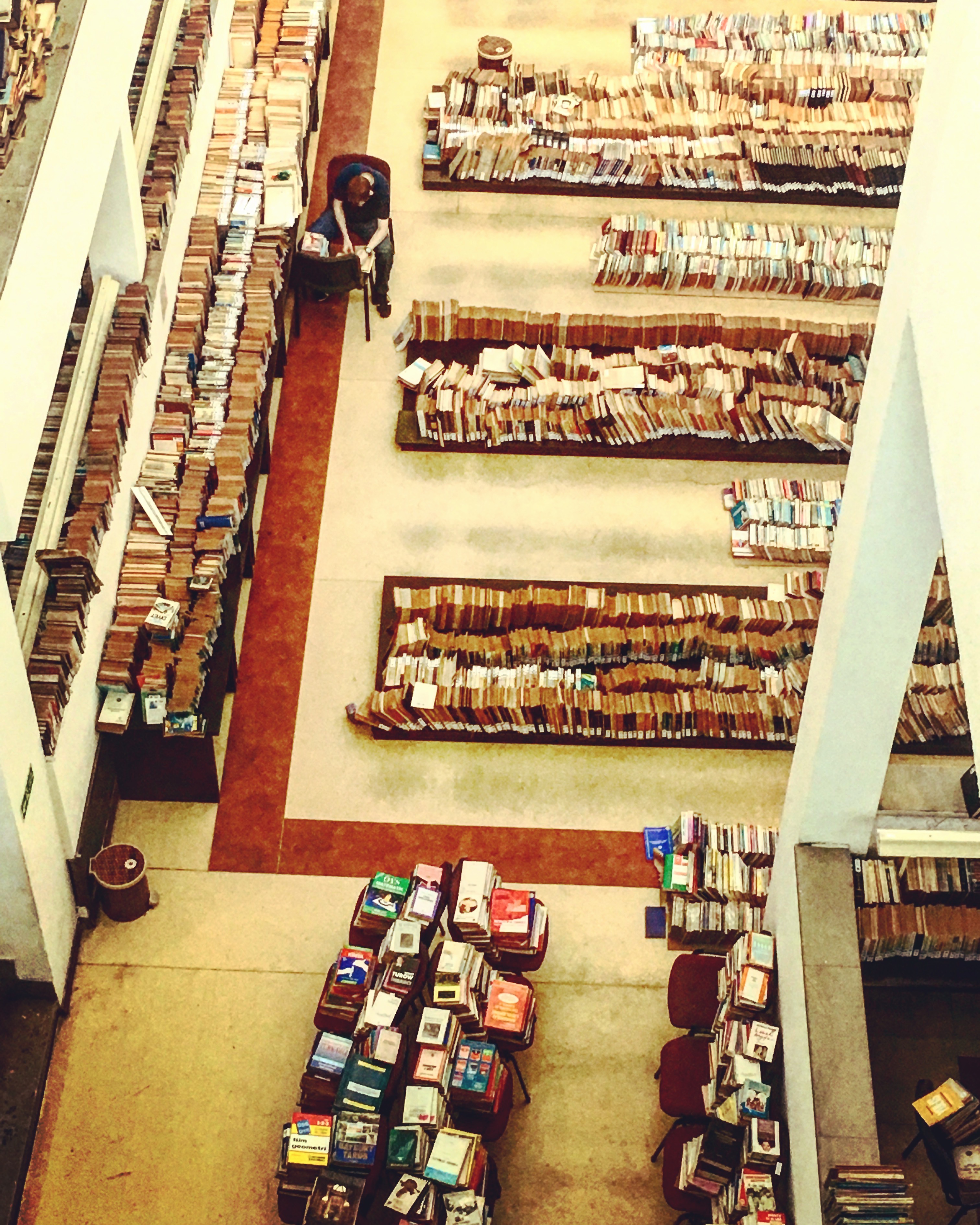 “Afternoon in the Library”: Istanbul University’s Main Library is under renovation and closed to the public. But the office where I had to go to secure permissions for its rare books collection (housed elsewhere) was still open in September 2018. While waiting for my paperwork, I snapped this shot of a lone worker lost in stacks of books waiting to be carted away. Photo taken in Istanbul, Turkey. 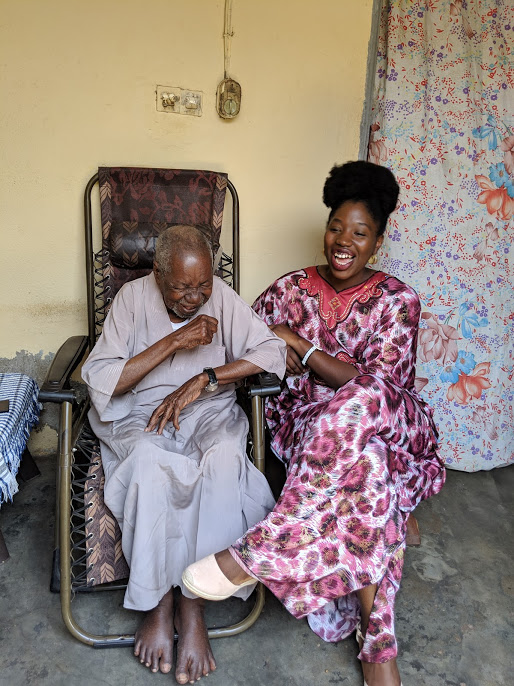 “Oral History”: Malamine Diarra was born on February 18, 1927. He currently serves as Elder of the Union Workers Community of Mali. He welcomed me in his home in Bamako and shared numerous memories for approximately one hour. These included the political struggle leading up to independence; how Modibo Keita, first president of Mali, inspired him to become a teacher; and how the French colonial administrative “wouldn’t let Blacks study algebra” because they deemed it a potentially subversive subject. He had a lot of jokes, too! It was a delightful interview and I look forward to visiting him again. Photo taken in Bamako, Mali. 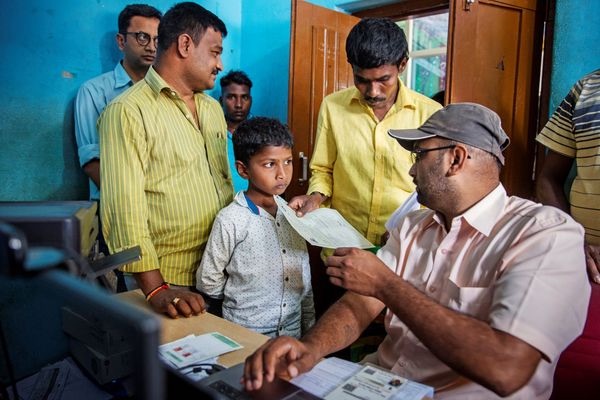 “Fly On The Wall – Ethnographer as Participant”: Standing against the wall, observing a room in which computer-mediated delivery of government services is taking place, I participate in the experience of “interacting with the state” on a day-to-day basis. The photo aims to depict the position of an ethnographer as both present inside a space of action as well as close to its periphery. Photo taken in South Karnataka, India. 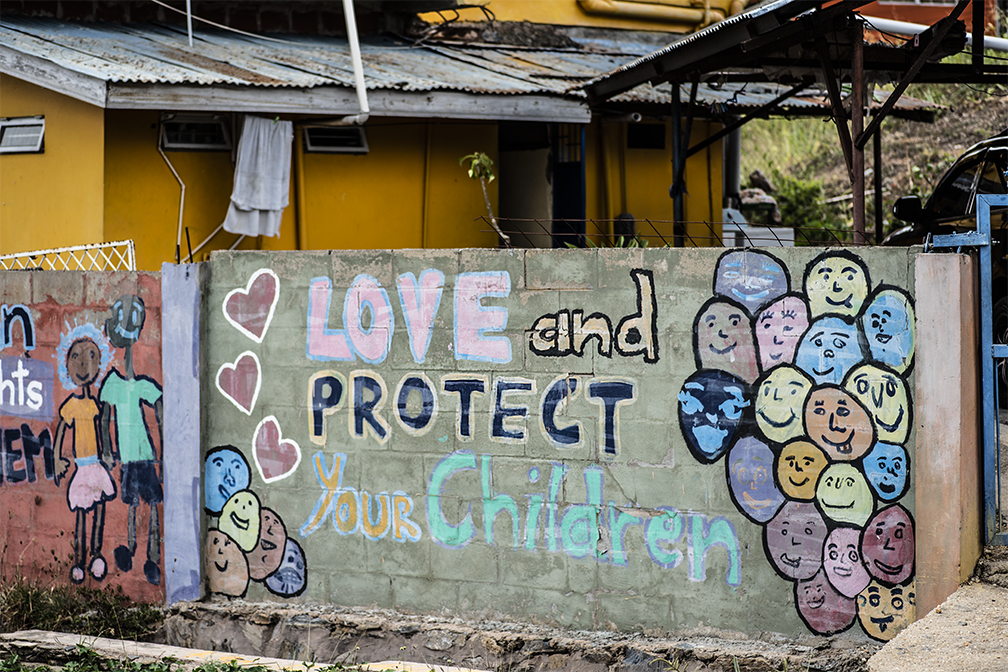 “Save the Children”: With the exponential rise in the number of “gang-related” murders in East Port of Spain, Trinidad and Tobago, since the beginning of the twenty-first century, several social programs have been established by the Trinidadian government and local NGOs with assistance from the US Department of State. The stated aim of these programs is to discourage youth away from crime. They predominantly target young boys, as the police service classifies young men 13–35 years old as the common demographic for gang affiliation. The following images document moments from some of these initiatives. Photo taken in East Port of Spain, Trinidad and Tobago. 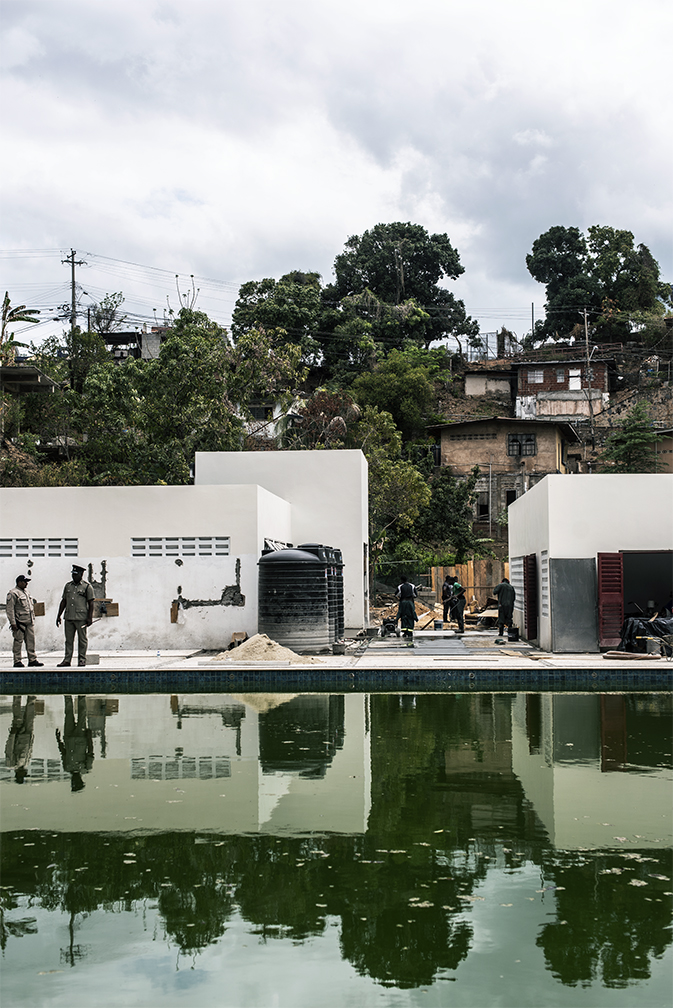 “More Than a Pool”: Crime-fighting social programs in East Port of Spain (EPOS) often use sports as a medium, where practices of bodily care are entangled with the disciplining of a potential unruly self. This image was taken at a site visit for an Olympic-size pool, which is being constructed in EPOS. The minister of national security, the commissioner of police, and several policing units came to visit the construction site. The conversation centered on the ways swimming could be used to train and govern youth and prevent them from “choosing crime.” Photo taken in East Port of Spain, Trinidad and Tobago. 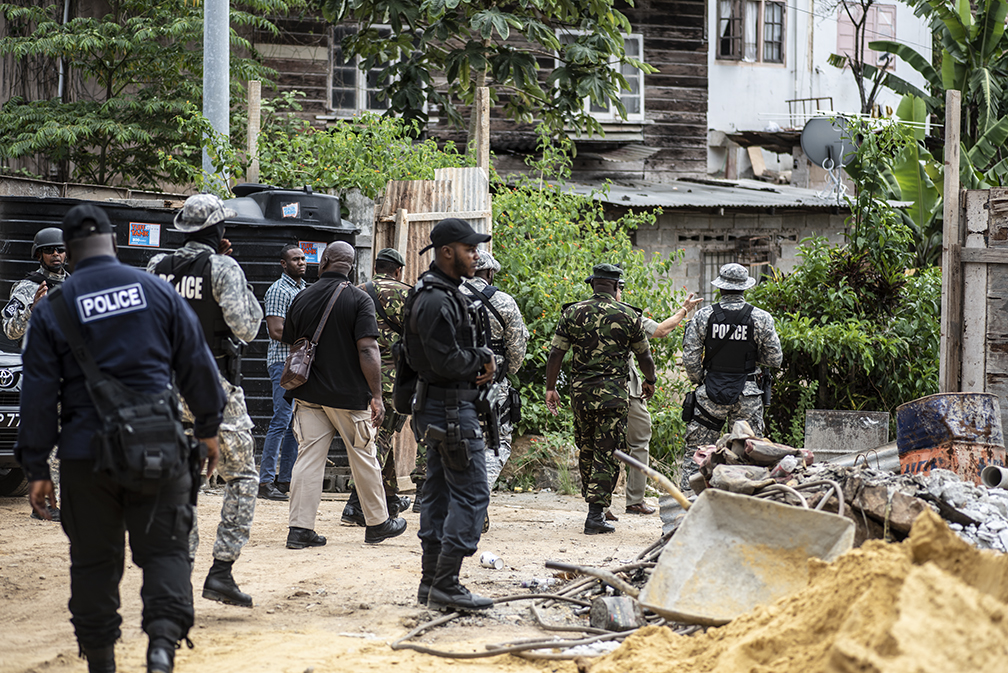 “Site Visit or War Zone?”: Some of the different policing units and army officers present at the site visit. The Special Operations Response Team of the Trinidad and Tobago Police Service now uses military fatigues as its uniform. Photo taken in East Port of Spain, Trinidad and Tobago. 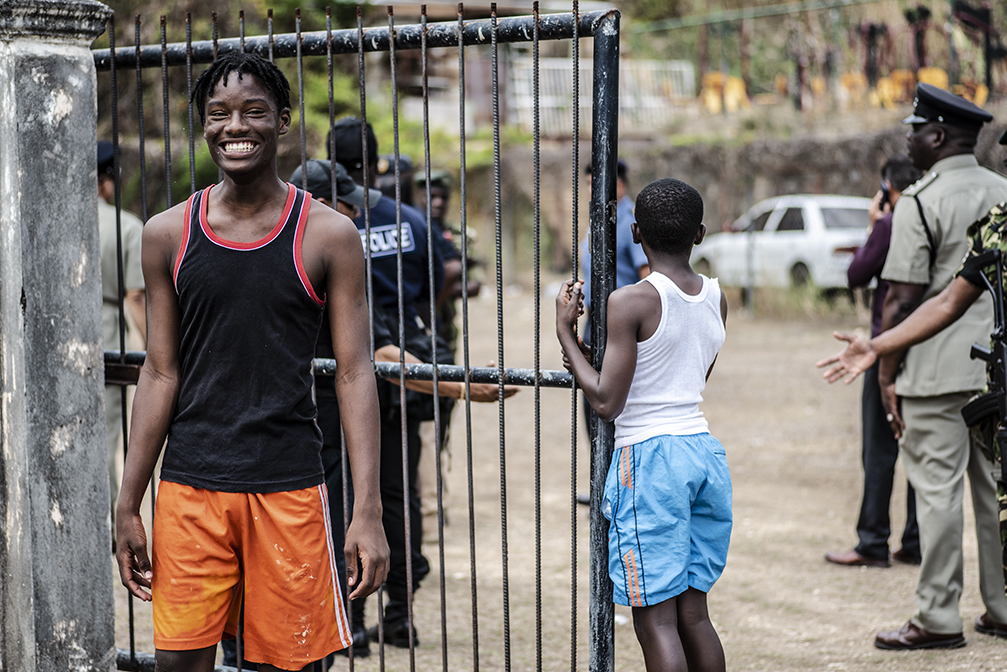 “Do Not Trespass”: After visiting the pool, the commissioner of police, the minister of national security, and other police officers went to visit an army outpost located in East Port of Spain to aid in the management of crime. The children who followed the contingent to the outpost were barred from entering the gates of the small compound. As some children looked on outside the gates, one young man asked me to take his picture. Photo taken in East Port of Spain, Trinidad and Tobago. 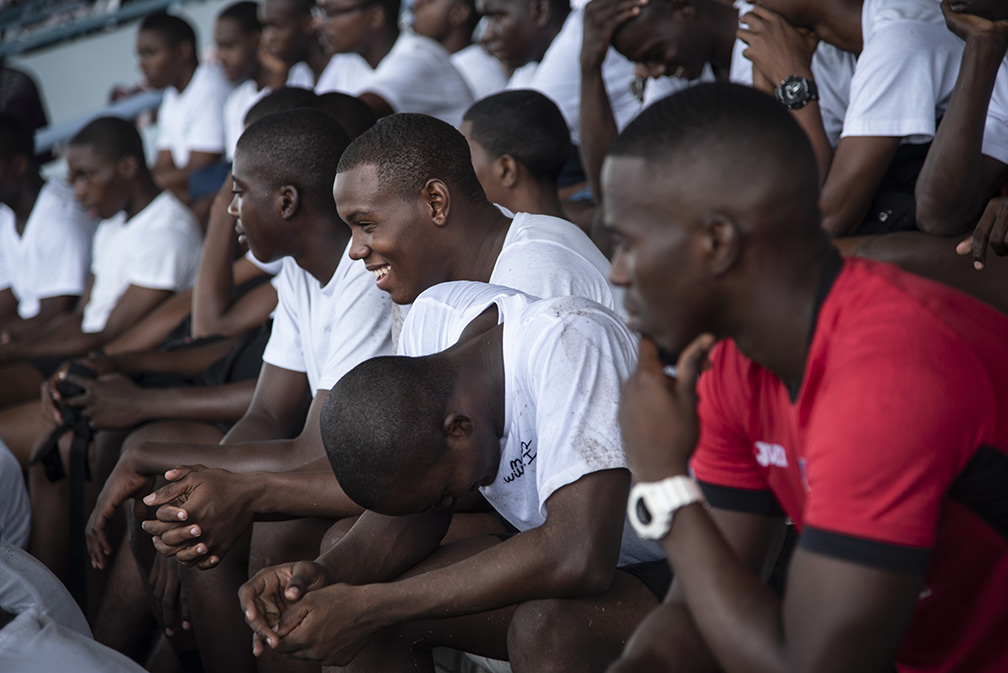 “Military Sports”: This picture was taken at a football (soccer) event for young men participating in the Military-Led Academic Training Programme (MILAT). This program targets what it terms “at-risk young men” 16–20 years old. The football tournament was sponsored by the US Department of State through the US Embassy in Trinidad and Tobago. The young men pictured here are waiting in the bleachers for the torrential rain to stop so they could play a game. Photo taken in East Port of Spain, Trinidad and Tobago.

“Lost Camera”: Since early 2000, many Tibetan monk and lay antipoaching groups started to work with Chinese and foreign natural conservationists and animal scientists coming to their region. Infrared camera pictures of wild animals have become a nexus where Tibetan conservationists can prove the ecological vulnerability of their region, and where modern scientists and conservationists show a professional interest in. With these collaborations, Tibetan conservationists work to combine Tibetan cultural knowledge and animal ethics with modern conservation methods. They aim to preserve the environment and culture on the Tibetan plateau during politically hazardous and economically changing times. Local conservationists face challenges from both government harassment and local communities’ misunderstanding of their goals. I went for a seasonal camera inspection field trip with the founder of a local conservationist group, who is also a former monk. He discovered that two of their infrared cameras were stolen and suspected that local poachers had taken them away. These recent poaching activities are largely driven by a demand for wild animal parts from the Tibetan plateau on illicit Chinese medicine markets. These include deer antler, otters’ intestine, and bear bile, etc. Yet the escalating political sensitivity and pervasive corruption among Chinese local governments on the Chinese frontier make the implementation of wildlife and environmental law highly selective. Some Tibetans risk the smallest chance of accountability by continuing poaching wildlife for even higher prices. Given the impossibility of requesting help from local police, the conservationist in the video speculates about ways to continue conservation—both to meet the expectations of the modern conservationists and animal scientists he works with as well as benefit the Tibetan community in a sustainable way. Video filmed in Ngawa, Amdo Tibet (Sichuan, China).

“B-Grade & Single-Screen Theaters in India”: This video essay focuses on the relationship between B-circuit, single-screen theaters and the B-grade cinemas of India. The images in this video essay were taken during my 2018–19 fieldwork in the cities of Kolkata and Mumbai, although some images are from archival and personal collections. Through these two categories of images—“taken” and “found”—this video essay delivers a succinct description of the B-grade and single-screen theater scene in India. Both Mumbai and Kolkata are thriving metropolitan cities that have seen the rise of urban shopping malls, designer boutiques, and multiplexes under the sway of a neoliberal economy. However, alongside these shiny objects of the new India, these cities are still haunted by the ghost of the past. Often, older single-screen theaters exist alongside these new structures, but evoke a world that is disconnected from the pleasures of neoliberal consumption. Located in marketplaces, spaces of bus and train transit, and red-light areas, theaters such as Silver Talkies and New Roshan in Mumbai, and Bhawani and Pradip Cinema in Kolkata routinely show B-grade and erotic cinema. The pleasures of these spaces, then, hearken toward a different kind of consumption—both the consumption of nostalgia for the celluloid past, as well as the surreptitious pleasures of consuming erotic imagery in a society that is usually seen as being bound by strict moral and censorial codes. Video filmed in Mumbai/Kolkata, India.

Next article Death Insurance: The PCC and the Protection of Life in the Twilight